Why a guy must buy

There have been so many posts swimming around in my head of late. Things are still rather hectic here, for us at least (our lives are still only a fraction as hectic as everyone else we know, but that is intentional because no one in my home handles chaos very well, IMHO...) Throughout the days, though, I am mentally composing blog post after post.

I won't lie: most of these posts are not fit to write, let alone to display anywhere that is public. Many are rants, mostly about the economy, the culture, money, idealism, unreal expectations, and men in general. Those are the posts that I think about, plan half-heartedly, and then toss out. Nothing good will come of putting those thoughts on virtual paper.

However, here's one that seems to be acceptable—men and the need to pay for food. Why is this? I know it's a performance thing for a young man and a special young lady. Fellows like to be able to pay, or at least that used to be the standard. (That's not to say they always did that or were able to do that...but it was a preference for many.) In this day and age, honestly, I can imagine that many young women have just as much if not more means to cover a meal eaten out.

But I'm not talking about dates; I'm talking about friends. Guy pals who happen to have lunch, or get together for coffee or a drink or something. The guy I know best seems to always feel it is his job to pay. It doesn't matter which one of them initiated the occasion. It doesn't matter who the other man is. The friend could be incredibly comfortable, not struggling in any way, a well-to-do co-worker who's comfortably ensconced in his second or even third decade of cushy employment, a person who co-owns a successful business, etc. The whole thing could have been the other party's idea... and yet my hus wants to get the check.

I get together with gal pals and we happily Dutch treat every time. There is no awkwardness, no real arguing about whose responsibility it is. The important part of the meeting is that we're together. We're talking, sharing, laughing. It does not matter who's paying.

Is it only my fellow who is like this? Are all men? And is this need to pay a pride thing? I realize more and more every day how much pride motivates us all, and I am seeing how it's a powerful (and frequently destructive) force especially in men. How they are perceived by everyone around them, especially other men, is hugely important to them. So is that what drives this need to pay for others? To prove success, to show without doubt that they can and will "take care of it"? It feels like more than just a kind gesture when the recipient of the meal originally suggested it, and/or is obviously in a good place and does not require the favor in any way, shape, or form. I understand that it's a nice thing to do at any time, for anyone... but does that mindset outweigh common sense even if money and finances are more of a concern for the person who insists on paying?

Thoughts? I'd honestly welcome other feedback here; I've been accused of being tight-fisted.
Posted by Mel at 9:37 AM 2 comments:

Popping in to "crow" a little

Hey, I miss this thing! I have already thought of several posts that I'd like to write. When my little world stops swirling so much, I will be back. I don't have any real news yet, but I figured I'd share my pal Roostie with you. I just finished him today. I hope to paint more soon, but life has suddenly become busier and it's just not happening. 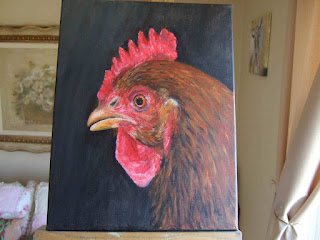 Enjoy the unbelievable, almost frighteningly warm and sunny weather with which we've been blessed. It's weird, but it's good—for now, at least. Wonder what's coming down the pike for summer...
Posted by Mel at 2:43 PM 2 comments: