Voting with your fork (and your dollar) 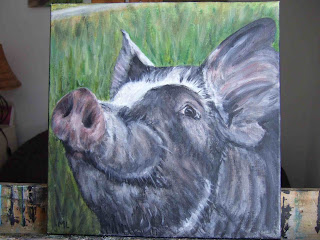 Here's a little painting I just finished last week. (This painting, like most of the paintings I've featured here, is for sale in my Etsy shop.) The subject of the painting is one of a bunch of awesome Berkshire pigs, which are owned by the fine folks who run North Woods Ranch. I featured this ranch once before, right here, after I had painted a different sow from their growing herd.

Their ranch is home not just to the Berks, but also to Scottish Highland cattle. All the animals at North Woods Ranch are privileged (in modern America, anyway) to live their creaturely lives in the traditional, humane way that was intended for such creatures. They roam freely, eating or rooting in grass, exploring small sections of field to which they're confined for a few days before being moved to another plot to exhaust that space, and so on. Their food is supplemented with natural, non-corn-based feeds. Nothing that goes into the animals is genetically modified, none of the critters require regular does of steroids or antibiotics (because they're not living nose to hind end in filthy quarters, eating food that makes them ill), and the animals are never caged or confined. As a result, the pigs and cows are healthier—and therefore, their meat is healthier in every way.

One of my favorite books of the last decade is The Omnivore's Dilemma by Michael Pollan. I recommend it to people who can handle the truth. (Remember A Few Good Men?) I have read and re-read it, and I'm more and more determined each time I revisit it to stay committed to the task of eating responsibly and with as much awareness as I can. It's not just about meat, though; it's all the food in our industrial system. What most of us are really eating, every day? Corn and petroleum. But I'll let you read it for yourself.

The copy I have right now (having lent a couple of others, and subsequently replaced them) seems to be a signed paperback. I found it at Half-Price Books (love that place) and it sure looks like Pollen's name in the front title page. Whomever it is urges the book's owner to "vote with your fork," and while I agree with that sentiment in an indirect way, I feel as if Americans grasp the idea of voting with dollars a little better. Where we spend is what we value.

Will free-range, homegrown foods of all kinds cost more? Yes. Is it a deliberate choice about where you put your money? About which system you support? You bet. All that inexpensive food in the markets has a different price, really, but you'll never see it because the real cost is under-cut by our government. The people who help keep the sick, limping, oil-dependent system in place. Those people (as if I need to tell you this) don't care about your welfare. They talk a good talk, but in the end, when you need them to explain how all that corn syrup and corn-fed beef and steroids and antibiotic-resistant bacteria got into your and your children's bodies, you won't get any answers—they'll be on vacation in Hawaii, likely. So.

Inform yourself. I'll stop ranting now, but I encourage you, implore you, beseech you to learn more. To become a food radical. Your body will thank you. You'll be doing something meaningful, making a statement (however small). People don't need meat every day, at every meal. It's only possible because of a twisted means of bringing it to you in bulk for very little money. And when the animals suffer, so does your health. It's all related.

In the meantime? Go here and read about North Woods Ranch. Support it, and also other people who are trying to do it right. Community Supported Agriculture buy-ins are another great means of helping the little guys, as are farmer's markets. Or heck, grow your own food! Victory gardens are a fantastic idea all the time, not just in wartime. And stop buying tomatoes in winter, and asparagus in fall. Buy what's in season, from people nearby that you know, if you can. It's better for everyone.

There are certain musical compositions that are able to transport the listener. They stand the test of time, surviving and even flourishing centuries after their creation.

I must be honest: I don't think most music produced today will hold up too well over time. Especially the pop pieces, the flimsy, limpid lyrics sung and accompanied by one-act hacks. How could they hold their own against compositional and technical genius?

(Don't get me wrong; I do find the occasional amazing modern artist, even in the contemporary music world... but it doesn't happen very often. What I see more frequently is that the most talented artists go relatively unnoticed by most of the world.)

However, true musical gifts do still exist. The piece below, to which I've linked, is proof. It doesn't hurt that the musicians featured there are virtuosos in their field, that it's a stringed "supergroup" of sorts.

This wonderful piece takes me to fabulous places in my mind. Why don't you have a listen, and then read below and see if we visited the same location while we listened?

I wandered through a field in springtime, then through budding trees, watched sparrows flitter through the air, stopped by a joyful outdoor picnic and party, then ran with arms outstretched into a sunset over a meadow. And there was sun, not snow, on my shoulders.

January is flowing by uneventfully. In addition to a short week because of MLK day, the intense cold has caused school delays the past two mornings, so we're feeling rather topsy-turvy now because of the toyed-with schedule. Tomorrow morning will be the first real "early" morning, and I suspect it's going to be challenging...

But already, next week is the last week of January 2013. We've slogged just over one month through the dreaded winter. The second nine-week period is ending, most folks have actually taken down their Christmas lights and tree by now, and I recently experienced a stab of horror, for the first but not last time, when I remembered the 2012 taxes (we've started to receive the stubs from employers and charities and such). Ugh.

There's not much else to report, really—just typical January benchmarks: Sweaters, dry skin, parched throats, increasingly unwilling cars, static electricity, ludicrous heating bills, boots and tracked-in salt littering every entryway, looming tax suffering from last year, new tax suffering for this year as we watch the cash being stripped away from us... Not a superbly cheery time of year.

But one third of the way through! Already! I cling to that truth, as I rise in the semi-dark chill, seeking hot coffee and warm slippers. One third is a significant fraction. We can do this. We must do this.
Posted by Mel at 9:57 PM No comments:

Don't hate me because I'm beautiful 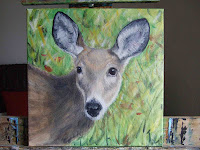 That's what this doe is saying to you. It's not her fault she's so darned pretty.

(Anyone else remember those cheesy 80s commercials, with the incomparably lovely Kelly LeBrock speaking those exact words to the camera? I tried not to hate her... and then I found out she was married to Steven "Ponyboy" Seagal. Nothing to envy there.)

I couldn't get this doe's face exactly right... I finally had to just walk away. I hate that, but sometimes it's either walk or start over—and there was no way that I was starting over.

Happy weekend!
Posted by Mel at 3:38 PM No comments: 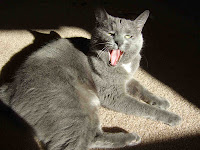 January brings, for me, a volley of emotions, among them an immense sense of relief. Holidays have passed, normalcy may resume, a blessed routine rears its dull head again. Ahhhh. Welcome back, normal. I missed you.

But another post-Christmas emotion, in my world, would be ennui. Suddenly, the blurry flurry of fuss is all past us. (I heard an awesome quote recently: "Nothing is over like Christmas." So true.)

And I oscillate between resenting the boredom (likely because of a predominant and foolish human tendency to seek excitement), and thanking God for the boredom because it represents a lack of drama in my circle of life—a lack for which I am increasingly appreciative in my old age. Drama enters the room, and all sorts of things come sweeping in with him: upsetting situations involving life or death, important decisions that must be made, urgent needs that demand attention, frightening scenes, emotionally charged responses from self and others... No, thank you. Too much of that is downright exhausting, and I prefer it in small, irregular doses. Not that life always gives us a choice, of course.

For today, though, I'll breathe; I'll look at the sunshine outside, and smile upon the perfectly manageable calendar. Bring on the boredom.
Posted by Mel at 3:07 PM 2 comments: