Of couches and husbands

I had a friend years ago, newly married, who took it personally and injuriously that her husband fell asleep on the couch every night instead of coming to their bed in an intentional and timely fashion. Perhaps she was right to be concerned, as their marriage dissolved years ago... But anyway, when she told me this, I can recall thinking that I might be annoyed, too. Not because I'd take it to heart or feel slighted, but because the latecomer would disrupt my own already-sought-and-achieved slumber. Thoughtless.

And I was right. Because guess what? My own dear husband suffers from this same disease. Not on a daily basis, mind you, but often enough that it does affect my own slumber sometimes. He knows that falling asleep prematurely, outside of bed, negatively impacts his restful sleep patterns and causes him to toss and turn (yep, more disruption for me). We both know that research supports our findings, with sleep studies that show over and over how sleep is adversely affected by such behaviors. And he is fully aware that the minute he reclines on that inviting piece of furniture, and allows his eyes to flutter, he is a goner for sure. He knows all this. Yet, some evenings, in spite of my dire warnings and predictions, he persists in lying prone on the dastardly sofa and even covering himself with an assortment of fuzzy blankets. What the heck?! I guess I am a bit militant about such things, but honestly, once a pattern is established, and once everyone involved agrees it is not a healthy pattern and needs to be changed and/or avoided, I cannot comprehend a person's willingness to continue the pattern!

Am I crazy? Is it just a handful of husbands, or are they all this weak-willed when it comes to a cushiony divan in the dim of twilight?
Posted by Mel at 10:30 AM 5 comments:

Precious is definitely related to fleeting

Our neighborhood is in a bit of flux. Two of our close neighbors who happen to live right beside each other are both trying to sell their homes at the same time. It's not because there's a neighborhood flaw (it's a great little street); it just happened that way. Which, of course, makes the prospect of slapping our home on the market anytime soon seem like a pretty poor idea. Small street, fewer than 12 homes total, and three of them for sale simultaneously? Not a good scenario. Alas, we stay put and wait to see what unfolds... (Which feels like the story of my life lately... but I digress.)

The entire point of this post, however, is not real estate markets. It's the idea that when we see an approaching end to something, then that thing begins to gain meaning and perhaps even value. For example, take our neighbors who are trying to move: one of the two homes seems to have found a buyer, and now I find that I feel sad and melancholy when I see the sellers walking their little dog. Each walk they take probably boils down to one of the last times I'll witness them strolling with the little guy (pictured here in a painting I just finished—would anyone out there like a commissioned pet portrait?) 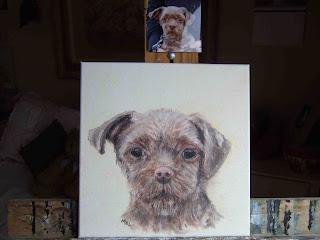 I wanted to paint a portrait of their pup regardless, just because he's so darned cute and they've been such great neighbors. Now, it looks as if the painting might end up being a parting gift. When big upheavals are imminent and impending, small moments and glimpses are loaded with sentimental weight. I suppose I'm realizing that one more familiar thing that I took for granted is likely going away. We can keep in touch, but it won't be the same—it never is. Something I assumed was a given will soon be taken. And that in itself makes me examine the soon-to-be-taken in a totally different light. Is that true for everyone? Is it human to re-evaluate everything right before, or even right after, it is removed from one's realm?
Posted by Mel at 11:00 AM No comments:

Not much to say

I've always found this time of year to be uninspiring. I know that many folks attack it with resolutions, plans to lighten their load of possessions, new approaches to help organize their lives... and those are all very worthy pursuits. It's just that I do that sort of thing all year, honestly, and frequently fall short or fail; my energy wanes in the grips of winter, after the holiday rush, and my attempts to revitalize myself and my life feel futile and phony. I call this mood my "dull-drums." It's a time to be thoughtful, I suppose. Or to ponder the amazing fact that my 10th wedding anniversary is just around the corner. Or to try to evaluate just when I stopped being viable and hip (or to realize that I never, in fact, actually achieved those states of being...) Mostly, I am trying to be aware of each breath, of the speed with which we're all spinning, of the fact that I am staring at middle age and don't have quite as much "going on" as I thought I would by now. I'm feeling pretty peaceful, though, about the ways that my reality differs from younger expectations I might have had about my fourth decade of life. God is kind, and He has shaped my understanding of success and contentment so that most of the time, I can truly feel comfortable in both those areas. On that note, I'll remain quiet here on the blogosphere sideline until I'm able to make more substantive observations. I hope you are finding health and happiness in the new year—and even if you aren't, the year is still pretty young, so don't despair. (And again, the single giant paragraph. Yep, still having issues. Sorry.)
Posted by Mel at 11:44 AM 1 comment: 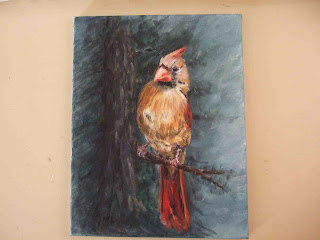 I finished this painting last week, but couldn't post it because of the operating system issues we were having. (We're still having them, but since they have not yet directly affected my husband's life, they are not yet being addressed. Sigh.) (Yes, I realize I should probably try to address them myself. I wish I had more than a misguided clue.)

So. I love female cardinals, and this little gal was so alert. She looked sort of like a gossip, not necessarily a mean-spirited type, but the bird who simply loves to share news of the neighborhood. Our pal Tom takes the best photos; this image was inspired from one of his beautiful works. It's for sale in the Etsy shop.

In unrelated news, my little guy is getting big. Filling out, solid limbs, visible muscle definition in legs now... It's freaking me out. As most parents do in times such as these, I suppose, I am recalling with fondness and nostalgia (and teary eyes) memories from his very early childhood.

One thing that we talk about frequently is the boy's discovery that most people have more than one eye. We were teaching him body parts, pointing to nose, mouth, ears, and eyes. We'd point to the feature, say the name, do it again, ask him to repeat us--you know the drill. At one point, after we'd done this several times in as many days, my sweet child was showing his new awareness to his father. "Daddee, eye." He pointed to his dad's eyeball, bringing the stubby finger close but not poking him (sometimes that happened). Then all of a sudden, the kid looked in amazement at my husband's entire face, and apparently it was the first holistic study he'd done. He said, with awe and amazement, "Daddee, two eyes!"

We still laugh about it to this day.
Posted by Mel at 10:28 AM No comments:

That's what we're having with our computer these days. Time for a new operating system... which we're researching now. I'm on a shared machine right now. If I'm an absentee blogger, you'll know why. And I'm going to enable comments without review by me. That might be a huge mistake. We'll have to see what happens. Often, the un-moderated comments turn into major spam... Stay tuned. And stay warm!
Posted by Mel at 10:30 AM No comments:

Coming out of the Christmas holiday is sort of like the last third of an amusement park coaster ride. The speed and spin factors become almost unbearable, you can see the finish line if you dare to open your eyes, and you feel increasingly ill.

Then it's done, you're coasting to a stop, and at once the simultaneous relief and letdown flood your every pore. (On a side, note, my post-holiday nausea probably isn't caused by motion sickness, but instead by a horrifyingly out-of-control consumption of cookies...)

As usual, I'm feeling much more relief than any other emotion. Christmas has pretty much lost most of its association with Christ, from what I see; mostly, it feels like a giant buy-a-thon these days. Not to mention that it's feeling rather brutal of late, what with pepper-sprayed shoppers and gun-toting, sneaker-buying thugs getting all the news coverage. This is why I shop second-hand, people—most shoppers can't afford weapons or self-defense sprays at the Goodwill.

So, honestly, I'm glad it's all over. Now comes the season of steeling oneself for the survival of long, cold, winter months. But already the days are getting a tiny bit longer, aren't they? We can cling to that, even while knit scarves and hats cling to our hair and throats as we try to endure the misery.

Happily, I am once again amazed and touched at the generosity of friends and family around us. We are really blessed, in so many ways. I guess that if I were to make a resolution, it would be to cultivate a genuine attitude of gratitude. A grateful heart really does change a person's perspective.

I found some great little Mary Engelbreit cards on clearance at the craft store, and one of them spoke to me: "If you don't like something, change it. If you can't change it, change the way you think about it!"

That will be my goal. Because, truly, I feel like time is slipping away faster than I can mark it. Alongside the relief of holidays safely past, crouching unobtrusively next to my snow boots, is the quiet, sobering realization that I don't have nearly as much time as I thought I did.
Posted by Mel at 10:43 AM 2 comments: