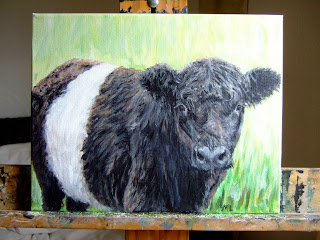 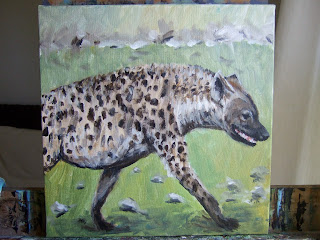 Two recent paintings I've done have found their way to their permanent locations, so now I may post photos of them. One is a belted galloway cow, painted for a lovely lady whom I've never met. (The cow now lives in Texas.) And the nasty hyena? That one was a special request for my son, who simply adores savage, vicious wild-dog types (from a distance, on a page or screen, of course). He'll be able to admire this one's hideousness daily, since it's hanging in his room.

It's funny; whenever I'm painting an animal—or depicting it in any medium—I am forced to really examine the subject's body, and I usually end up seeing some trait that I wouldn't have believed if I hadn't studied it for myself. A hyena's legs, for example: I looked and looked at the legs in the source photo, and they honestly were that long and ungainly looking. The front legs are noticeably taller than the back ones, as well. And the cow? Every single time I paint one, I am reminded anew that a cow's ears are not nearly as high on their heads as I think they should be. Is the cow morphing into a horse inside my mind? Why do I keep trying to put the ears on top instead of on the sides?

Enjoy the sunshine if you, like me, are blessed enough to have it shining in your midst today.
Posted by Mel at 1:13 PM No comments:

Stepping aside today to give stage to a better writer

I found this very uplifting article on FoxNews.com, and I am sharing it with you. I hope it lightens your heart a bit, as it did mine.

No cowboys to be found

(I might put some of you in a snit over this one.)

I was looking for a song on YouTube earlier, and had to sit through a stupid advertisement in order to get to the video I'd been seeking. The ad was for the razor/shaver/shave cream-producing company, Gillette. It seemed harmless at first, featuring a well-groomed fellow in a casual suit, chatting with beautiful models around what appeared to be a swimming pool party. He would question one lovely about what sort of fellow she preferred, and all the answers had something to do with the chickie-babe's body hair preference. "No back hair, just a bit on the chest, and there's nothing weird about a guy who's absolutely hairless..." You get the picture. The ad finished with close-up shots of a man's chest, being shaved clean of all hair, and then it flashed one last time to Mr. Groomed Interviewer—who made a smug comment that clearly implied how a hairless dude was sure to score with these gorgeous gals who shun body fuzz.

Okay, if divers and swimmers and male dancers want to shave all the hair, go for it. Your body, your choice. (Except, wow, I'll bet those parts itch when they start to re-sprout...) But honestly, isn't it bad enough that we pressure women to shave everywhere? To be smooth, thus more attractive and sexy? Now America is trying to brainwash its young men that overpowering cologne and aftershave will no longer suffice, and he must also shave his naturally occurring body hair? Really?!

It made me ill, then mad. Then I began to consider how our culture embraces unmanly men. The metrosexual, if you will. I know that term is outdated, but it doesn't really matter what we call them, does it? They're seriously short on masculinity. They might be the guys who spend too much time getting ready, who fear the outdoors, who think that manual labor ends with trimming the perfectly manicured grass or spreading bags of mulch. I saw some men's clothing ads in magazines recently, and the "men" on those pages were painfully skinny, harmless-looking guys with highlighted hair, wearing pastel shorts and un-scuffed, spotless bucks. They looked like fellows who'd prefer shiny cars and restaurant meals, who'd eschew sweating unless it's performed in the proper place (a crowded gym or club, of course). Where are the man's men? Where are the cowboys?

I know, the cowboy is a bit romanticized. There were probably times when he stunk and had dirty underwear; it's unlikely that he knew how to hold a goblet correctly, or the best way to consume oysters on the half shell. Some of them were possibly rough characters who lacked nobility and thought women were servants. But seriously, which one would you rather have in an emergency? Whom would you call if you heard a noise in the night? The gun-toting steak lover who fell asleep on the couch in his stained T-shirt, or the pretty boy sporting silk pajamas and a pedi?

I fear this is part of the downfall of America—not just the falling away from God, the epidemic of fatherlessness, the dissolving traditional family unit, but also the absence of real men in general. Men who encourage risk-taking and even a bit of foolishness. Those men started charcoal grills with gasoline, gave their children pen knives with which to forage and explore, and forced the kids to mow the yard before age 16 instead of keeping things safe and moving to a townhouse. I'm not saying I embrace the stone ages, that I'd give up my education and my freedoms and my vote in elections; those are invaluable rights that I deserve as an American, let alone a woman. But God made boys and girls different. Making girls more powerful and men more feminine won't change human nature, and it's doing a serious disservice to our country.

I see it especially with children. Kids need a balance; they need to have a parent who teaches them caution, and tidiness, and the finer points of navigating the feelings of others...yet they also need a parent who encourages them to build a bike ramp or clubhouse, collect bugs that might sting or bite them, or wrestle it out in a spacious area. We all need balance. While our youthful characters are developing, we need for both those types to be present in our lives, so we know not just how to walk away from trouble but also how to make a proper fist and not end up with a broken thumb. When all the parental figures begin to look like the fussy, safe ones? Then we're in serious trouble.

This isn't meant to be a statement on men who shave everything, nor on people living in townhomes. I'm not condoning gasoline as a safe fire starter. But I do see a connection between commercials that encourage men to shave so women will like them, and the dwindling numbers of old-fashioned men in our culture. To my way of thinking, we could use more straight-talking, straight-shooting cowboys these days.
Posted by Mel at 2:38 PM 4 comments: