The restless beast is stilled—momentarily

I believe in sharing. In theory, anyway. Which is why I'm barking at everyone I talk to today, why I'm muttering moody epithets to myself as I stomp around the house completing jobs, why I have been unsurprised to find myself visibly scowling each time I passed a reflective surface. I'm just sharing my cranky state. The weather stinks, it's mid-winter, I panicked this morning and canceled plans thanks to overly zealous weathermen, and now I have probably missed a perfectly good, sunny afternoon when I might have been out gallivanting... Huff, sigh, groan, growl.

It's been that kind of January, hasn't it?

Anyway, since I've been so eager to share my annoyance, frustration, and irritation with anyone who's willing to tune in, I should (on the flip side) also share something positive and delightful, to make up for my curmudgeon-ness. So, I will.

I had an absolutely fabulous time yesterday afternoon, in spite of snow and slush and icy gusts. My best little guy and I had a date—at the symphony.

Now, we don't go there often, although I'd love to. We've enjoyed the Pittsburgh Youth Symphony Orchestra several times, because it's fun and inspiring to see youngsters playing those instruments with such skill and aplomb. Plus (perhaps I should mention this little tidbit) the PYSO performances are usually free. Yep, gratis. That's double-plus-good for us.

But yesterday's show was a special treat, one that we'd been hoping would come around someday. You see, my son and I are huge John Williams fans. Yes, the John Williams who writes movie music. The true deserver of the moniker America's Composer. I love Copland too, people, but I think JW has him beaten. I do. Who cares what motivated the composition? Does it really matter that it was written to accompany scenes of a film? To me, that makes it even more awesome in a way. I know how it feels to paint a picture that I have chosen to render—and how much more difficult the task becomes when it must be made to order for someone else's preferences...

Anyway, when we heard about this show, even my husband looked pointedly at the two of us JW admirers, and suggested that we go. It was decided. And since my best big boy would be coming back from a weekend out of town on the day of the matinée performance, we decided that only Mom and Son would partake. Then, my charming kiddo stepped into the amazing kid arena by declaring he'd contribute allowance money to the seat purchase so we wouldn't have to sit in peanut heaven. So—I knew without a doubt that he really wanted to go.

We bought the tickets online, and waited for the big day. Which was yesterday, as you know. Even before we got inside the venue, we were met in the lobby by a brass ensemble's swelling performance of the Superman theme, and the music just got better and better. The concert was commanded by resident conductor Lawrence Loh, a gifted, youngish fellow who is also a self-proclaimed JW junkie. He was a perfect choice for the day, introducing each piece or even particular scene with gusto, background information, and an occasional prop or outfit. Loh morphed into a Jedi knight with light saber in hand for Star Wars; then, Professor Dumbledore himself used his "wand" to lead the symphony in selected Harry Potter musical selections. Loh was a fantastic master of ceremonies and maestro, and the perfect choice for such a rousing collection of memorable, heartwarming, bewitching tunes. He made no excuse for Williams' soundtrack niche, acknowledging only his greatness and genius. That gorgeous music filled Heinz Hall's soaring arches and intricate corners, and not a single classical music snob could be found. The adoring audience thanked both conductor and composer with rapt attention, roaring applause, and not a single peep from a cell phone.

The best part of the day occurred to me halfway through the first half, as I sat alternately wiping the corner of my eye (the opening notes of Jurassic Park) and grinning foolishly (Hedwig's Theme): I realized, with quiet shock, that I was sitting perfectly still. I wasn't wiggling a leg, or drumming a finger, or twitching my knee. I was just sitting. I was completely in the moment. Maybe that doesn't sound like such a big deal to you, but for me? A B-I-G D-E-A-L. I cannot sit still easily; long car rides are torture, meetings used to make me alternately yawn and weep, even long movies have become challenging. It just feels like a waste of time, my mind wanders, and my body yearns to move busily about, engaging in restless activity after restless activity.

But yesterday? That music washed over me with a physical presence, a calming aspect that I haven't experienced for months. It was splendid.

And now it's a precious memory. I wish I could have bottled the moment, the scene itself—not just the sounds, but also the smells and sights of that wonderful snapshot. And I wasn't alone. Everywhere around me, people were smiling. I haven't seen that for a long time.

Thanks, Lawrence. Thanks, John. For those two hours, I was completely at home right where I was. What a rare treat.
Posted by Mel at 2:45 PM No comments:

Embracing the ides of January

I've been flying rather high since I survived the holidays. And look at that calendar—it's the middle of January already! We've been comfortably busy with normal life such as school and related functions, church activities, and even the highly likely sale of one of our old cars. Just enough excitement for me. I feel alive, but in a good way; I'm not drowning in fattening, befuddling festivities. I am thankful.

Here's the latest painting, created from a photo that I took of (what else?) cute animals from North Woods Ranch. I needed a rest from dog paintings, which were—happily for me—popular as commissioned Christmas gifts. (Piggies are for sale in my Etsy shop.) 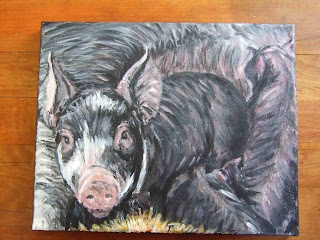 The days, they're gettin' longer! (Say it with me, in an affected Scottish brogue. Wasn't that fun?)
Posted by Mel at 1:41 PM No comments:

I think I'm finally feeling almost normal today. Christmas holiday, New Year's, extended vacations for my son and my husband, then a ridiculous cold front that caused more unplanned time off—all that mayhem has meant no time for me to enjoy the silence and build up my introvert reserves. Even today was tarnished by yet another school delay. I love my son, but when we can't even step outside for fear of frostbite...? Enough.

At this moment, at last, I am flourishing in stillness. The swish of the washing machine in the basement is the only sound to accompany my tapping on the keyboard. Blissful. Soon, the symphony of rushing heat from the vent will start again, offering a variety in my minimal auditory stimulation. Perhaps I'll turn on some music in a little while, but not yet. Not yet.

I visited Macy's recently (an item to return, an unused gift card—these are the things that are required to get me into the mall). I stood in that vast space dedicated to consumer culture, and I gaped at the innumerable items around me. Modern, classic, work-out, work-wear, young and hip, old and proven. And that was just the petite section of women's clothing. Are you kidding me? How's a person supposed to choose from such a plethora of options? I don't have the energy to narrow down the categories. At least, I don't want to expend my precious energy doing something so pointless for very long. I know I've written about this before, the ludicrously large number of choices we have when purchasing anything, and I'm still wound up about it. More and more, I love thrift stores. Now I can add this reason to the list: fewer choices to have to make. Limited options simplify my life; too much of anything is not pleasing.

I can carry that argument back into the Christmas season, which finally limped out the door while I kicked it and hollered with glee. I love Jesus, yet I despise a lot of Christmas. And you know why? Because there is too much of everything. Think about it. Too many parties, too many dinners, too many cookies, too many responsibilities and gifts to buy and people to remember and time off and even too much red wine. Excessive revelry, even excessive fellowship, makes me antsy and short of breath, eager only to retreat.

So, I grasp with new depth why I steer clear of Macy's and places like it, and why I sing joyfully to myself as I take down the Christmas decorations. It's not just a new year, or even a new start that lightens my heart.