So we have this neighbor. I'll call her Edwina (not her real name.) From day one at this house, Edwina has inserted herself firmly into every single moment possible. She has come traipsing over to our driveway and door through every single home project, especially those within clear view, to offer advice and general observations. She has accosted each of us in our own ways, not just my own family but the other neighbors as well, to question us about intricacy upon intricacy. She seems to have no verbal filter whatsoever, and although her intentions appear to be merely friendliness borne of boredom, her curiosity can range from slightly annoying to downright rude and intrusive. She tells us what to do, tries to tell our child what to do, points out unfinished house business, and pries at us until we snap a bit. Even my unbelievably patient husband has grown weary of it.

When I'm in the wrong mood, I covertly check through shaded blinds to see if she's outside before I hurry into the yard for any reason. When I'm in the right frame of mind, I try to placate her endless queries with generalized but good-natured answers. I wish I could say I am in the right frame of mind most of the time, but remember? I'm a self-admitted loner and a privacy freak... so I often don't appreciate her nosey questions.

While I've been repeatedly dealing with Edwina's boundless curiosity, I've been simultaneously participating in a Bible study at a nearby church. We began by tackling the ancient book of Job. Wow. Short name, long suffering. Much wisdom about the character of God can be gleaned from that book. Each week, we've worked our way through more chapters, and the other women in my group and I have all discussed the depths and nuances of Job's ordeal.

The biggest lesson I've taken from it has been my need to question God less and accept and praise more. Even though Job is a righteous man to begin with, the humility that he learns by the end of his book is astounding. Who are we to question God, His ways, His means? Where were we when the world was formed? Do we know what all the animals are up to? Did we arrange the cycles of life, the rotations of the planet? Did we create any single living thing around us, including ourselves? And Job sits with his hand over his mouth, frankly embarrassed by his own impudence, listening to God and feeling small.

We were discussing the way that Job had initially questioned God's purpose, how he had wanted to know why things were happening the way they did. That led to some talk about our own questioning nature as humans. A few of the ladies in my group went on to say that often, we mere people want to win God over to our own plan, to "help Him" get things done in a way that pleases us. Sometimes we ask God too many questions, or try to insert ourselves and our desires into His plan. And God doesn't appreciate that; God works independently on a need-to-know basis, and honestly, most of the time we don't need to know. We probably wouldn't understand anyway—our perspective is pretty selfish and skewed.

And then, in the midst of this discussion, God poked me in the side and reminded me of Edwina. Her nosey ways. Her constant questions. Her advice. All unsolicited, unwelcome, and—here's the kicker—totally uninformed.

Just like my ways. I have been known to play Edwina to God.

Yikes, that was a disturbing thought. I remembered all the times I had bitten my tongue with frustration when Edwina asked yet more pointed questions about things that did not concern her, that she had no need and no right to know.

Just as I have done with my very own Maker.

So. There it is. I need to trust God more. When I do that, then I can stop asking God all those unnecessary questions. I'll bet He would really appreciate that.
Posted by Mel at 2:08 PM 2 comments: 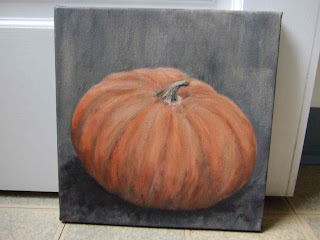 Yet another finished painting! I feel so prolific. (It's available in my Etsy shop.)

I've been painting more than usual lately, probably because I'm trying to pull myself out of the doldrums. Why doldrums, you ask? Because it's fall.

I find autumn to be depressing. I know some people love this time of year, but I think I hate it a little bit more than I love it. The incredible skies, the crispy leaves, the aromas of earth and dried green things and occasional wood smoke, the promise of—

That's the only thing that's promised to me in all this last-gasping beauty: Cold, dead winter.

See? I told you it was depressing. It's like that handsome, older boy I once knew; he'd smile at me and the sun would shine brighter on my day, and then I'd see him later with his date and he'd pretend not to know me. All stunning, dazzling bluster, with a chilly finish. That is autumn to me.

Still... It's here. I'll keep painting outside for as long as I can, and will breathe in all that fabulousness for as long as it's available. After all, I'm only down in the dumps—I'm not foolish.
Posted by Mel at 3:01 PM 2 comments: 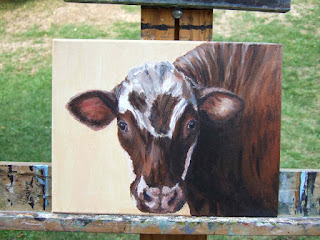 Here's my latest painting. I hurried so I could finish working on it in the back yard, which is very pleasant when 1) rain isn't falling, and 2) the wind isn't trying to blow the canvas off of my easel.

If you live around here, then you already know it's likely I won't be painting outside today.

The only thing I've missed from our old house is the covered patio. I hope there is one in the near future for this dwelling.