Some of you know that I started working for just a few hours each month at a Michaels arts/crafts store. I instruct others in craft projects and painting. Saturday wasn’t an actual workday; it was something called a Class Preview that the store does quarterly to promote classes. I sat with several other crafters and we each engaged in our specialty at tables inside the store’s entrance, answering questions from shoppers and handing out class calendars.

I was painting a canvas, talking to folks, and I was thinking about work in general. I was thinking, Boy, I used to work a real job. I used to ensure that the hamburger you last enjoyed at one of the big chain restaurants was built properly by helping to maintain that restaurant chain’s big training manual. I used to help write description pages for office furniture catalogs. I used to help in the construction of ketchup brochures for a certain big ketchup-producing company in town. Anyway, I used to do real work, at a real job. Important work. It’s not like teaching arts and crafts is important in the big scheme of things.

And then it slowly began to dawn on me that my former jobs weren’t really important jobs either. Maintaining a restaurant training manual? Yes, it was a B I G chain, but still—is it really crucial to the world’s balance whether the restaurant in France places cheese on the burger in the same way we do in the States? And the furniture catalogs: is that truly essential work? Is the world going to end if I leave out a callout pointing to a desk grommet? The ketchup brochures and condiment flyers and such—was anyone’s life improved because of those colorfully printed pages and bold headlines?

You could say I was indirectly contributing to America’s capitalist system by helping those companies look their best and train their people well. And that’s true. But. I wasn’t making a D i f f e r e n c e. Not really. I suppose I made a difference to a few people when I taught school, although I couldn’t see it at the time. There are still some noble and/or necessary jobs out there, like teaching, or building things, or making power or defending the country or growing food or saving lives; hopefully, parenting is in there, too. But plenty of us, if we’re honest with ourselves, spend hours a day doing rather silly jobs—jobs that 100 years ago, perhaps even just 50 years ago, wouldn’t have existed. Our modern economy has managed to create an entire slate of careers that would be utterly useless in a non-commercialized, less materialistic culture...a less bloated, more primitive culture.

“Real” work? Well, I guess it’s in the eye of the beholder. Meantime, I’ll keep on rearing my little boy, and occasionally teaching non-essential skills. It’s all work. And most work, if done with sincerity and purpose, can be noble.

Portrait of an artist 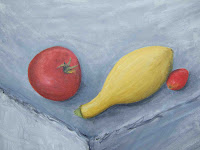 Yes, you!!! Why not? The colors, the canvas, and you the artist with brush in hand, poised before a masterpiece in the making—isn’t that a lovely vision?

Well, now you can make that vision a reality. Yours truly (Mel herself) will be teaching painting (assuming I get any students) at the Michaels store on McKnight Road. There are a couple of classes scheduled for October, and more to come. Still life, anyone? How about a portrait of your kitty or pup?

I’m really looking forward to it. If you know anyone who’s ever expressed an interest, feel free to spread the word/forward this blog/call the store and get that person a "scholarship" as a nice gift. Printed schedules with dates and times are available at that store, or you can always contact me directly and I’ll give you the skinny.

(And yes, that is my latest still life pictured within this entry.)

P.S. Marcus attended his first Pirates baseball game last evening; a friend took some photos, and if/when they come my way I will share them. I think he enjoyed it!
Posted by Mel at 11:14 AM 3 comments:

Have you been watching “The War” by Ken Burns on PBS? It premiered this week and it’s phenomenal. Depressing and sometimes horrifying, yes—but phenomenal nevertheless.

It’s got me thinking about humanity: the state of being human. We all are not just fallible but also able to fall, able to be physically hurt and emotionally traumatized—and susceptible to influence by everything we encounter. “The War” features so many heartbreaking stories, told by the survivors themselves, about their shock at the reality of war. One old gent told of being revolted by his first sight of dead German soldiers, men whose lives he had taken—because he understood for the first time that they were his age, just kids. He still choked up over it, this fellow in or near his 80s. It’s still that real and awful to him. Another man told of a midnight ambush, pitch black night, in which he heard an anonymous comrade get shot and then listened, annoyed, disgusted, and mostly exhausted, as the poor dying fellow groaned and called for his mother—for hours. That annoyed man learned the next morning that it had been his best friend who was shot and suffering—and who had finally died in the night. And that man’s face was so bleak as he recounted the story of his lost friend again, all these years later. He’d never gotten over it. He never will.

I think of the many ways that horrific events can alter a life, even if experienced as an adult. We are all so vulnerable, so impressionable. I ponder the deep impression that’s left on a child who experiences something terrible. I do believe that some folks carry a predilection for making bad choices—it’s not all nurture that forms a person—but it’s undeniable that our experiences shape us, good or bad. And no one gets through unscathed. I’ll bet you could go to Japan, or Germany, and find WWII survivors there who, just like our U.S. veterans, still feel revulsion at some of the things they saw—and did.

I don’t even know what I want to say about all this. I guess I’m just coming to the conclusion that human vulnerability unites us all. Whatever side you’re on, sometimes you’re just following orders, and often the results are tragic and haunting, even if what you did was right or necessary or justified. We all come into this world with promise, on equal footing, and we all leave it bruised and bloodied by the hurt and pain that we’ve received, and caused. Even Hitler was someone’s little boy once; I read somewhere he was an excellent student, conscientious and disciplined. I wonder when, exactly, he began to move with intent toward evil dictatorship and his plan to exterminate a people group. What could have caused that plan to form? What happened?

P.S. Don’t worry—I won’t be this heavy every time I post an entry. Something light next time. I promise!
Posted by Mel at 2:16 PM No comments:

Quirks of the kid

Marcus turned 2 1/2 last week. His favorite trick this week? Why, inquiring about your day, of course. He’ll ask anyone, but he likes asking Todd and me best. Over and over. “Hey, how’s your day?” We’ll answer, and then not 30 seconds later, he’s asking again. “How’s your day?” We try to explain that this is unnecessary, even a tad rude--that it implies he's not listening to the reply. We try reasoning with him, explaining that he just asked us this question. He cracks up when we tell him this. He even beats us to the punch now, saying it for us: “You just asked me that!” Then he laughs. And, with a maniacal gleam in his eye, asks the question again.

And the kid talks nonstop. A couple of months ago, his favorite thing to say was “adin.” As in, when he’s being tickled, the tickler will stop and Marcus will say, “Adin?” because he wants to be tickled some more. It still slips out occasionally.

He loves names of things. Of animals. Of streets. Mostly he loves people's names; often, he is terribly reluctant to turn to the next page of a book we're reading until everyone has been named. I usually just give up and create names for each person in the picture. "Okay, okay," I'll say, "that one is Sophie, and that one is Fred, and this is Biff, and the dog is Sparky." Then he's happy; then we may turn the page.

He had an imaginary camel friend a couple of months ago. It was his finger—his pointer finger. The whole thing backfired on me one day as we sat at lunch; I was reprimanding him, and happened to point my finger at him as I scolded. I know, I know, not a good habit... I’m trying to stop. It does nothing to punctuate the scolding, anyway--as evidenced by this exchange:

Marcus informed me as I pointed that I had a camel too. “Mommy camel.”
“Huh?”
“Mommy camel. Mommy has camel too.” He pointed at my finger, pointing at him.
“No, I’m angry and I’m yelling at you.”
“Mommy camel.” Again he showed me patiently where my camel was, even reaching out to touch my finger. "See it? Mommy camel."
I gave up. It was like trying to reason with—a camel.

Sometimes his camel is accompanied by a baby camel (which is, conveniently, the pointer finger of his other hand--with that finger bent just slightly, so it's a tad smaller and shorter than regular camel). Was I this odd as a child? Were we all? Probably.

It's a darned good thing he's cute. God knew what He was doing, making babies, kids, puppies and kittens so adorable--it's their only hope for survival to adulthood.
Posted by Mel at 10:08 PM 2 comments: 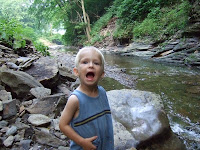 So I keep thinking about a blog. I know, it's been done, it's so yesterday, no one reads those things anyway. And yet, I am intrigued; I still yearn for my own. I've been composing imaginary entries in my head for months; I might as well bite the bullet and start one of these puppies right now, or risk mental clogs caused by repressed verbosity.

(It's all the boy's fault. As soon as I birthed him, I had more and more stories to tell. Even before he arrived, he was a story. He becomes more and more blog-worthy each day.)

Therefore, I embrace my blog destiny. I invite you to check on us periodically for the latest updates, news, deep thoughts, not-so-deep thoughts, and observations. Oh, and memoirs, of course--hence the name of this blog.
Posted by Mel at 9:20 PM 6 comments: