Here's something I'm not going to write about: the denial-turned-melancholy in my heart when I walk along our road and see the first leafy hints of autumn, fluttering nonchalantly to the ground, spinning dizzily as they fall.

And the feeling in my stomach when my son climbs on the hulking yellow bus and rides away from me. I'm not going to write about that either, because I don't want to ponder the empty feeling in my stomach that has nothing to do with an inadequate breakfast. I choose not to dwell on his fleeting childhood that I am free to witness, but never to slow or delay. The uneasy feeling that time is slipping away from me, and moments are passing more quickly than I can record them—I'm not going to write about that.

Maybe I could write about how I recently canned homemade items from garden produce. That would be a happy post, right? Well, no. Not when I remember how much work and how many tomatoes go into creating a very small assortment of canned goods. Besides, I've already written about it here and here.

Dear Makers of the Kindle E-Reader:

I am the owner of an older model Kindle Fire. I love it, except for one design flaw—when I'm sitting in reasonably bright light, reading from the Kindle, I have to place the reader in such a position that I see my own, awful, loose-skinned lower neck reflected back at me from the smooth surface of the reader. The sight of that hideous neck skin is so ugly, and so much resembles a turkey wattle, that I am sickened and thus rendered too ill to finish my Kindle activity. I'm guessing that you've already addressed this flaw in newer models of the Kindle Fire, but that doesn't help me as I am unable to part with that much cash again when I have a perfectly good Fire in my hands already. Perhaps you offer some kind of beauty filter? A scrim of sorts to fit over the Kindle surface, something that will soften or alter the appearance of my awful lower neck? I'll hope to hear back from you soon with a solution to this issue.


There, that ought to do it for today. Happy Labor Day weekend!
Posted by Mel at 9:09 AM 2 comments:

The husband and I were hurrying once again. We tried to ignore raindrops spitting on us as we began our belated drive from a family occasion on the opposite side of town. We were likely going to miss the whole thing, I fretted, hadn't got out the door when we'd planned, and we scanned the threatening skies and sped northward. We were forced to stop repeatedly for a plethora of reasons, it seemed. I pondered the wisdom of this decision... Yet we drew closer. Does this number 7 on the map mean that this stretch of the trip is 7 miles long? That can't be right. Shouldn't we be there by now? Is that a splash of rain or a dead bug? And then, familiar faces ahead, silly teenagers that we knew—they were pointing out parking places with excessive drama. Todd maneuvered our big station wagon to the indicated spot (yes, we still drive a station wagon, not an S.U.V.) and turned off the engine.

We leapt out, and I could hear people singing softly; we scurried up a steep backyard slope and saw many human backs standing before us. Small, tall, thick and thin, dark and pale. As unobtrusively as possible, we threaded our way through the many bodies, then landed at a spot near friends. I dropped the quilt I'd been carrying (for sitting on the ground in relative comfort, if we chose), and the kid and I kicked off our shoes. Lyric sheets were shared, and we joined the throng and sent hymns of praise Heavenward. Voices rose together, and we took turns gazing first at a beautiful lake of considerable size, then at the lightening sky.

The moment was approaching, and my son couldn't see; he is only 8, after all, and even shorter than I am. I took his hand and we carefully made our way to one of the picnic tables near the back of the gathering, where a stretch of empty wooden bench offered "high ground" on which my little dude could stand, thus gaining a better view. We watched as a widely varied group of folks began to populate the small beach next to the water. There were statements, explanations, and prayers. Then names were called, and one by one—children, old men, new moms, sheepish teens—each person stepped forward to be reborn. Pastors waited in the water, and the people came to them; some were shy, some confident, a few wiping at their eyes. Of course we applauded each time a soul was renewed. They came up out of that water dripping, and smiles abounded in both the dipped and the watchful. Were you wondering about those gray clouds that had dogged us all the way there? Well, they hovered and teased, but they never wept a single drop.

Afterward there were boat rides, wading, opportunities to feed the lake owners' tame fish, much visiting, and a general hubbub of joy.

From one family event to another, from blood connection to a brotherhood and sisterhood borne of confession and water: How blessed am I to have both.
Posted by Mel at 5:12 PM 1 comment:

At last, a new painting

Finally I've finished another painting. (Painting in July and August is just plain difficult. Unless I have time on my hands and, in this current monsoon summer, a covered patio under which to pitch an easel... which I do not.) 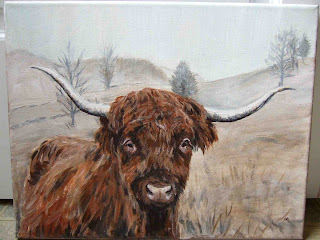 My source for this one was a lovely photo taken by the fine folks at North Woods Ranch. It features one of their fuzzy beasts, eying the camera (with suspicion?) on a foggy and somewhat mysterious morning. Every time I look at it, I think of the song "Misty Morning Hop" by Led Zeppelin. Not that the cow looks ready to hop around—especially not to that thumping tune. But the mist, people. The mist.

So. It's for sale in my Etsy shop.

Not much else is happening here. We are sadly marking the days until school begins. We camped out in the yard last night, and let me tell you, there are plenty of creatures stirring around 2:30am. Including me, with a small hill and at least two tree roots under my spine...

Enjoy the weekend; I hope you are able to squeeze in at least one activity that delights you.
Posted by Mel at 9:11 AM No comments:

Every now and then, a ditty from my childhood pops into my mind unbidden. I do not know from whence it comes, but it comes nevertheless. One of my recent inexplicable memories was a child's book that included a song.

Back in the day, we didn't have all this here techno-gimmetry. We had a handful of read-aloud books with little 45-rpm records that fit into a slot in the back cover of the book. I'd get the turntable ready, and clumsily put my record on it, then set the needle in position and hurriedly open my book to read along to the scratchy story. I believe I had a rendition of Bambi, or maybe some other tragic Disney story, but my favorite read-along was Johnny Fedora and Alice Bluebonnet.

Being a clueless child, I didn't realize that the genius of Johnny and Alice's story was found in the liltingly beautiful voices singing the words to the storybook—none other than the fabulously talented Andrews Sisters. Add one corny, touching love story to those gorgeous pipes, and you have a winner.

I told my son about it, and he was curious. I found it on YouTube (of course I did, because if you look hard enough, you can find anything on YouTube). I made him listen to it, which he didn't mind because it turns out that my little storybook was based on a cartoon movie that accompanied the song. Then my husband heard us singing the words; it turns out that he was not familiar with this classic. Can you believe it? Grew up in a cultureless vortex, that one...

So we made him listen and watch, too. He wasn't as entranced as I thought he should have been. Alas. I try to bring meaning and purpose to his life in every way I can. If he refuses to accept my offerings? That is beyond my control.

What's that, reader? Is it possible that you, too, are unfamiliar with this gem of Americana? Well, now, we can't have that.

Go here. Enjoy. And remember a time when even children's entertainment was of a higher class.
Posted by Mel at 8:47 AM 1 comment: