The Lion in Winter (and the giraffe and the bear) 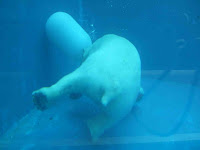 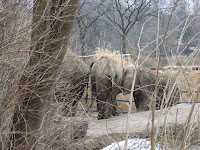 Some exotic backsides especially for you! Which leads me to my post...

Watching the weather this past weekend, I could see that Monday was shaping up to be a potential winter zoo visitation day. Come Monday morning, the predictions were oddly still correct, and the day dawned rather gray but dry, and somewhat cool but unseasonably warm for February. I made one last scan of radar on the Weather Channel, packed the kid’s bag with unmessy edibles, and off we went to the Pittsburgh Zoo and Aquarium.

It wasn’t our first visit, but it was our first winter visit. We missed a few of the warm-weather animals that were either hidden or on hiatus ‘til spring. The huge, disgusting Komodo Dragon was absent, as were those cute, tiny crocs (or are they alligators?), and Kids Kingdom was roped off—so no petting tame deer or crossing bridges over the otters and their buddies. But most of the other animals were happy to see us, or so it seemed. The tigers were up and about, and as one of them eyed me hungrily from across a steep crevasse, I recalled with a shudder the recent escape of and attack by one of these fierce beasts in another zoo. Alas, this one stayed in his designated area, and we exchanged looks before walking on to see the lions (both lounging on their big lookout rock), giraffes, zebras, elephants, and ostrich. No gazelles, though—perhaps it was too cold for them?

The rainforest (monkey house) was not quite as horrifically pungent as it is in warmer months. We witnessed lots of varieties lounging and nit-picking, and were lucky enough to get a great, swinging view of a baby orangutan. I couldn’t linger by the gorilla’s area, though—three big adults were sitting quite near to the glass, and although their sheer size is rather frightening, the worst part of all is the absolutely human expressions on their faces. I can’t help thinking that they understand their situation completely and would never choose such a fate. I actually felt guilty taking a couple of pictures, even though the opportunity was golden, because it honestly was like looking in the window of someone’s home and photographing him as he sat listlessly on his couch, utterly resigned to his doom.

On a happier note, the wild dogs were scampering about. And the bears were out, mostly sleeping, but one (whom I respectfully did not photograph) was completely absorbed with a certain part of his body. I’ll leave the details up to you, but suffice it to say I don’t think he even noticed us. Thankfully, Marcus didn’t put the pieces together so I didn’t have to explain that one. Then came the aquarium; we made our way around it more quickly than I’d like (Marcus gets a little freaky in all the dark areas, even back by the penguins, where I could spend many minutes); then we parked our gear and ourselves in front of the giant two-story tank, munched our lunch, and watched the fish dancing to new age music. (I’m not a huge fan, but for this purpose, the synth-heavy sounds were perfect.)

Then the polar bears, which were delightful, plus a flirtatious peacock and his unimpressed amour, and the ever-playful sea lions, and the domesticated animals (llama, camel, reindeer, sheep, goats), and that was about it. The best part of all was that there were no crowds, no huge lines of classrooms taking up the viewing area, no sweat dripping from our brow, and no over-heated animals hiding in the bushes. Plus, the price is a smidge lower in winter months—and lower prices are always a good thing!

What I’m trying to say is that it was a really enjoyable few hours, and the shame of it was that we practically had the place to ourselves. If the temperature’s going to top 50, think about a little trip to the zoo. It really is a great asset to our city, and although limited in size, it keeps getting better and better. Spending a good part of the day outdoors is also soul-lifting, as is watching God’s beautiful living creations pacing, prancing, and napping right before your eyes. Until I can afford safari or rainforest exploration, this is as close as I’ll get to most of these critters—and I’m surely thankful to have had the opportunity to see them, even in captivity. The fish alone could make you cry; so amazing, all so unique, moving with such fluid grace… I could get positively weepy sitting in front of that big tank of miracles.

Next time we experience an unseasonable warming trend, take a hooky day if you can, slow down, and gaze with appreciation at some awesome creatures. I counted only 24 cars in the lot when we were leaving; I hope that next time we visit, that number is much higher—and that your car is among them.
Posted by Mel at 9:20 PM

Cool pics. I need to get there to see the polar bears. Alas we must go on the weekend. blah.

even the weekend in winter months will be much roomier than a warm-weather weekend. morning is better than afternoon, too, for both weather and crowd reasons. you will not believe how big the polars are. a swipe of one huge paw could easily take someone's head off--but they look so huggable behind that safe glass... hope you make it there soon.