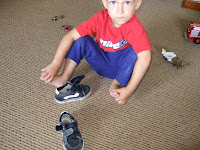 I continue to be plagued by nightmares about losing my son. It’s especially bad in the hours between 4am and 6am; I am awakened, sometimes by coughing child (caused by allergies) and other times by puking cat (caused by sheer catness). Once awakened, I have trouble falling back asleep—and when I’ve finally achieved a sleeping state once again, I inevitably find myself dreaming that my child is missing in some form or fashion.

Sometimes, he’s in a crowd of children and I can’t visually locate him. Other times, I’ve entrusted him to someone else’s care and they’ve let me down by allowing him to wander, or giving him permission to go with someone else I don’t know. Each time, I am frantic in the dream, searching, calling, running around like a crazy woman, and there are always other people in the dream who think I’m a worrywart and tell me I’m over-reacting…kind of like my waking life.

Where does this come from? I wonder if it’s normal, or if I am, indeed, obsessed.

And the dreams are so terrible because he is so innocent. In each unwaking scenario, he trusts the people he’s with, he has naively gone with strangers, he never ponders whether someone means him harm or doesn’t plan to protect him adequately. He has simply followed whomever because he can’t conceive of a person who wouldn’t be kind or mean him well—because he is usually that way. Isn’t everyone? (Sadly, no.)

I was bemoaning recently how I’d love to go shopping and blow some money, and we just didn’t have it to blow… and my sweet boy said, “Mommy, you can have the money from my piggy bank. Go shopping with that money.” Now, that amount of change is not likely to take me far, but how sweet that he offered—it’s all he had. Like the widow in the Bible parable, he was willing to give his all. Just so I could splurge on something.

And he is delighted by the simplest things. I was stringing beads on a rawhide string, and the kiddo saw me and wanted to participate. I gave him his own leather string and some beads, and he went to town, stringing away, carefully picking out the perfect piece each time, taking some off and replacing them, until finally, the work of art was completed and we tied it ‘round his neck. As if that wasn’t darling by itself, I offered to open the closet door so he could look into the full-length mirror inside and admire his handiwork. He was so pleased at his own reflection sporting the beads that he grinned, put his hands on his head, and scurried away laughing with glee.

This is the little boy that I must eventually send into the world. How can I do it? How can I not do it? I shudder at the thought of how the world will scar him. Applying a germ philosophy, he must be first exposed in order to earn immunity. I know that’s true; I know he must be exposed. I’d even like to hope that perhaps, just perhaps, his innocence can counter some of the evil floating around out there. But I know how vulnerable he is, how hungry “they” are to strip away that childlike nature and sense of wonder.

This watching-him-grow thing is going to be tougher than I thought.
Posted by Mel at 11:16 PM

I feel your pain. Although I rarely have dreams like you, I find myself lying awake some nights and worrying that something will happen to Jordan. During those times, I often beg God to keep Jordan safe and never take her away from me.

I am not for co-sleeping, but because I worry about my kid, I sometimes let her get in bed with me when she has a bad dream or cannot fall back to sleep. I figure the three or four times she does this a month just gives me the chance to be with her and watch her at her most innocent.

Unfortunately for me, my worrying has kept me from doing things out of fear that I may not make it back home to her. But I am one of the few people who is rarely bothered by my 10-mile, 45-minute commute. I just tell myself the chances that I will be seriously injured or worse is pretty slim, since we are all driving slow. And that was just another chance for me and Jordan to be together in the car since she used to be with me for most of it.

Yep, I'm starting to realize how fleeting is their small childhood. I sometimes lie in bed with M before he goes to sleep and we sing songs and lullabies. I think, I shouldn't do this, he's getting too big, I don't want to spoil him--and then I think, pretty soon he won't want me in here, he'll be going to sleepovers where he would die of shame if his friends found out I ever lay there and sang songs to him. So, I'll do it now while I can. ; ) And we all have fears about our own mortality. I just pray and take it one day at a time.