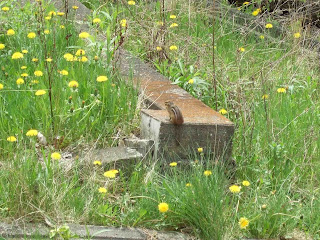 I was really starting to worry; on all those warm, luscious mornings this region enjoyed recently, the kid and I would feed the birds, pull some weeds, draw with chalk on the patio…and the entire time, I found myself scanning our “rock garden” (I use this term quite loosely) for the diminutive chipmunk that had charmed us almost daily last year.

I looked in vain; Chippy was nowhere. Birds came and went, all his fat dove friends perusing the dropped birdseed under the feeders, the sun shone brightly, the first butterflies of the season flapped about with abandon… but no Chippy. Where could he be? Had he found another yard in which to dwell? Had he become the unfortunate landing place for a car tire? Had a hungry hawk and his ravenous pals relished my sweet little striped-back critter? I couldn’t bear the thought.

I tried to put it out of my head. I gave up, at least on the surface. Chipmunks come and go. They have no loyalty. They’re wild, shy, covert. Of course our little guy had found a quieter place to forage. There we were, riding Big Wheels and talking loudly and moving things constantly and tramping through the rocks around the feeders. It was only natural that such a timid creature would come to his senses and begin a new season in a new locale. I tried to be content with a new finch, a great number of buds on the peonies, amazing growth from the clematis. I tried. But inside, I never stopped hungering for a glimpse of that little brown streak of fur.

And then, he was there. Yesterday morning, after a spring shower. Rummaging among the birds for dropped niger seed. He moved just as quickly as I remembered, stuffed his little chippy cheeks to near-bursting, sat as still as a stone with his mouth full when he detected my motion from the doorway. I called for my son, who hurried into the kitchen to see if I were teasing him. We watched with delight, then Marcus said, “Mommy, take his picture.” I snagged the camera from the dining room and we tiptoed at a crawl out the door and down the four steps—and Chippy saw us advancing and ran for his life.

But he stopped just inside the neighbor’s yard, allowed me to snap a photo, then scrambled out of sight. I saw him later that day, as well. He’ll be a regular again, if we’re lucky.

I'm embarrassed to reveal this...last year, we enjoyed watching the chippies scrambling over our assorted construction debris, and it provided endless fascination for the cats through the window. Then one day, a death. One of our entertainers fell into the overflow bucket for our rain barrel and drowned. (Of course, I then heard/read the stories of people who used water buckets as a tactic to get rid of their "pests," but I still felt bad.) Have noticed fewer this year, but I wonder if the local red-tailed hawk is to blame?