I'll bet you think I'm talking about something really important when I say tough decisions: where to live, what to do with my life, which job to pursue, whether or not to adopt a child, etc.

Well, I'm not talking about anything that serious. I spent some time this morning going through my closet. I was trying to determine what still fits, which garments can live happily and well beyond their decade of origin, etc. But what I was really trying to see is what still feels right on a 41-year-old's body.

I got rid of some items. I ended up devising a short list of checkpoints to help me decide which pieces just don't work anymore. Is it more than an inch or two above the knee? Ditch it. I have short legs; I don't need to be fretting about whether or not my chubby thighs are hanging out. Is it an unflattering color that I could get away with ten or twenty years ago, but now looks desperately youth-driven? Toss it. Is it apt to move around too much, thus requiring constant adjustment (pull-downs, straightening, pinning of straps to bra straps, etc.)? If so, lose it. Life is too short to spend it re-adjusting and tugging. There was a time when I was willing. Now? Not.

Then we get into the simple, common-sense checkpoints. Is it comfortable? Do those cute jeans dig into my belly and leave strange hieroglyphs on my skin? It's time for them to go. Does any part of my lower undergarments show? It should not. (Undies shouldn't show on anyone, really; I've never bought into the mentality that finds a glimpse of skivvies charming in any way. But on an over-40 person? Most definitely unforgivable.) Do the shoes or boots cause immediate foot cramps? Then they must walk away.

I don't have to spend much time pondering any sort of gauzy material. Must I wear a camisole or some similar item in order to get away with the rest of the outfit? Sorry, those days are over. I don't want to bother. Into the "out" pile it goes. Any top with a band around the bottom? Gone-zo. I don't even think I had any of those to begin with, thank goodness.

I guess what I'm trying to avoid is making a mockery of my younger self. I want to steer wide and clear of becoming one of those women at whom I used to snicker. You know the ones; I won't even bother to give specific examples because I don't want anyone I know wondering whether I mean them. Just imagine a middle-aged woman who is trying in some (or several) aspects to look younger than she is. It matters not the means she uses; it's just not wise. We can tell she's not 25 anymore. The plan is not working.

I will cling to the classics, the styles that stubbornly refuse to identify themselves as "stylish." The way I look at it, I'd much rather try to have style than simply be in style. Fashion comes and goes; style remains.

Maybe it's motherhood that's caused me to confront my true age. I long ago stopped worrying about whether I embarrass Todd (tee hee), but I really don't want to make my son feel awkward. I have to shake my head at the moms who show up for classroom parties with cleavage bared; what are they thinking? And when the kids are teens? You don't want to try to compete with your daughter or her friends, and you certainly don't want to try to attract your son's pals. That's just wrong.

Anyway. Motherhood. Below is my latest creation. If you need a Mother's Day gift, check it out here! And if the mother in question cooks or bakes, you can even get the same design on an apron. How's that for original? Okay, now I'm finished hawking my wares. 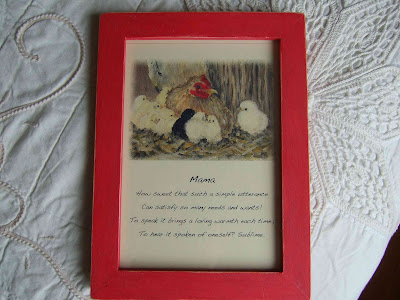 The great thing is that if you're reading this and thinking I'm a fuddy-duddy, it's a free country and you are entitled to think whatever you want. You can even go put on a completely inappropriate outfit and parade around the street in it. Isn't America awesome?
Posted by Mel at 2:08 PM

OK, now I need you to go through my closet and decide what I should get rid of...kind of like my own personal Stacy/Clinton (of What Not To Wear). Sometimes, you just need someone else to honestly say "It's a keeper." or "No. Just no."

Oh, no--I think the "through the looking closet" journey must be made alone. Trust your gut, and when in doubt, toss. I think we all know the answer that Someone Else would give if he/she were in the room. At least, we know the answer if we have good and multiple mirrors to show us the ugly truth... sigh.

Funny, but when trying on clothes in the dressing room with one (or more) of my sisters, they often say "yes" when I most definitely say "no" and vice versa. Makes me think of an old Robert Burns quote...

"O wad some Power the giftie gie us
To see oursels as ithers see us!"

I definitely don't see myself as others apparently see me!

Interesting. I guess I don't shop much with my sisters. Plus I know that I am an impatient shopper and have occasionally been known to say something is fine because I want the shopping to be finished... Sorry. : (