The creation of homemade, home-grown tomato sauce is a journey. From planting, to tending, to gathering, to peeling and gutting and cooking... and the result? Not nearly representative of the amount of work and time put into the creation. That starting pile is only a sampling of the mound of tomatoes with which I began. The second photo, of the naked tomatoes in the sink colander, is the real number of messy globes that were destroyed in this process. 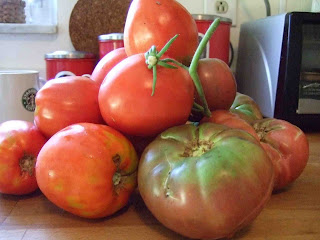 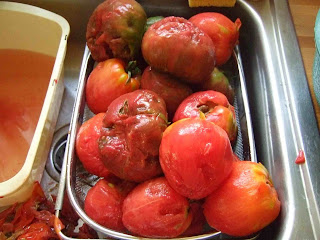 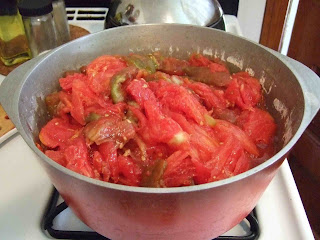 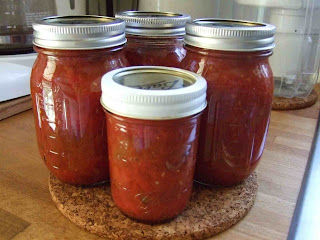 And yet, the flavor is luscious. So, I suppose it is worth it, sort of. It's not as if canning is really difficult work, only hot and time-consuming. And you can wander around while the stuff cooks down, and stop by for an occasional stir and taste... There are far worse ways to spend your time.

Yeah, I'll do it again. Next week. I'll freeze some, too. Much easier. But canning is a sure thing, just in case the power grid goes out, and honestly? Those rich, red jars are just plain pretty—and far more satisfying to regard upon completion.
Posted by Mel at 7:39 PM

Just a few weeks ago, our tomatoes finally starting turning. But since most of ours are the little kind (and I don't have the drive to skin tomatoes anyway), no sauce for us! Enjoy.

well, eat the maters in salads, and if you do try canning, the de-skinning is easy--just mark an X on the bottom with a knife, then pop them into a pot of boiling water for a minute or so, then into cold water. the skins come right off!