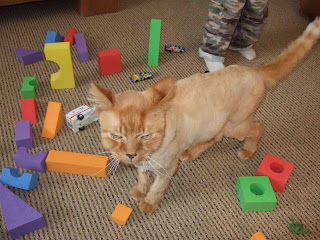 I’ve included a lovely picture of our shorn cat for your amusement. It’s related, loosely, to the post. Feel free to chuckle, and then read on.

So, the morning began awfully early. 5:00am, to be exact. The kid awoke, complaining of “nose hurt.” Probably because it’s dry, because our heat has been cranking non-stop for days now. Todd tried soothing him, I tried soothing him, we refilled the vaporizer and prayed he’d return to slumber.

No go. He was whining on and off for the next hour, and by the time the garbage truck showed up shortly after 6, he was in full foghorn mode, hollering from his bedroom: “Mama, I hear beeping. Dada, I hear beeping.” (The truck backs down our street, much to the chagrin of the sleeping masses.)

I finally gave up and got out of bed, Todd followed and made a beeline for the shower, and the kid and I looked out the window. More snow was beginning to fall. And on this morning, I truly didn’t mind.

The past few mornings have been filled with nonsense: Getting the brakes checked on the car (they were fine, thanks for asking); taking the goofball cat to be shaved so he stops puking hairballs all over the house in wee hours; running errands to various locations which, in light of the encroaching holiday, are becoming more and more inhospitable and crowded… So, the boy and I have been joylessly heading out amidst the flakes, drifts, and slush each day.

But not today—today is blissfully unscheduled, open, available, dull. Today, we’ve sat contentedly indoors; I ventured out only to refill the bird feeders (so the fat, lazy squirrels can fill their already rotund bellies with bird food) and then immediately came back in, feeling thankful for a warm home, a hot cuppa, and various cars and blocks for the kids to play with. (You can see the foam stacking blocks on the floor in that picture of kitty. They’re pretty cool—I play with ‘em, too.)

So, we’ll just stay home and watch from inside our cozy haven as the inclemency grows. Don’t hate me, though; remember, the boy has been awake since 5am—not to mention I’ve been hauling him around in the snow for several days, entertaining him at the Saturn dealership, distracting him while Christmas cards got printed at Staples, pulling him out of the back seat while blocking the cat’s premature leaping exit from the car, dragging the child from car seat to shopping cart back to car seat… he is just as happy to stay home as I am. I asked him if he wanted to go anywhere and without hesitation, he said, “No, just stay home.”

Sounds good to me, kid. Sorry for all you harried travelers, really I am. It’s miserable out there. I’ll be slipping and sliding among you soon. But not today.
Posted by Mel at 11:41 AM

lucky us! these early risers will be the death of their parents. DOUBLE UGH.

and you KNOW that when they start school, this will all end and they'll want to sleep in until noon. ; )

Don't you just love the early risers? And don't except just because they start school that they will sleep in. Mine don't. UGH. Even on the weekends they are up by 7:30.