Toys, and what they tell 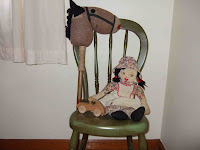 These (pictured at left) are the sorts of toys that kids used to treasure. Long before Bratz, Transformers and Wii topped Christmas lists, plain old handmade playthings were the cherished items in a child’s world. I re-read some sections from Laura Ingalls Wilder’s wonderful Little House series of books, and was astounded to be reminded of that little girl’s joy upon receiving a little tin cup, a cake baked with white sugar, and a penny. Her very own penny.

It made me more than nostalgic; it made me ill. Not because she lacked so much, not that at all—but because we take so much for granted, and squander what we’re given. And it’s not just the thanklessness and wastefulness that’s horrible: we also don’t cherish much of anything at all, including each other. The toys were simple back then, and if one were lost (Laura’s rag doll disappeared for months after she was forced to give it away—she mourned ceaselessly until rediscovering it in a frozen puddle) then the kid simply went without, made her own toys, borrowed a sibling’s for a moment. Children didn’t have 25 other things to choose from. Perhaps the well-to-do kids had plenty of toys back in the day, but I’m fairly certain they weren’t electronic robots or dogs and cats that you plugged into a computer to care for.

Our modern grown-up toys aren’t much better. How many grownups with too much spending money stood in line for days, awaiting the release of the newest PlayStation? Or scrambled among other crazed shoppers, trying to secure the latest iPhone? Aren’t foolish amounts of money spent on boats, ATVs, snowmobiles? And those are just expensive toys, for most of us—I don’t know a single person who uses one of those items for income purposes or to assist in the management of a business. Sony is releasing a 120-inch television; hello, did anyone else out there read Fahrenheit 451? Remember the huge TV screens that made up a wall of one’s home? Sound familiar? And how many idiots will join a waiting list to buy one for their home theater systems?

After Christmas passed recently, I had to step away from the entire subject for a few weeks because this year, it went beyond reminding me of how materialistic and commercialized Christmas has become: I became inextricably immersed in the understanding that our entire culture is backwards. I hear this at church, and I know in my head it’s true…but when my heart truly grasps it, I just need to sit down and let the queasiness pass.

We’re seriously screwed up. Most of the time, in most households, our priorities are very misplaced.

And I’m no better. Here I sit, typing this pointless entry in an online journal that I don’t need, which does not support me and does nothing to forward the betterment of humanity. It helps me a little, helps me to organize thoughts, to rid myself of frustrations, but honestly, it’s no different from any of the other useless pursuits, toys or otherwise, that my fellow modern civilized folks are chasing. Being online? All it does is permit me to avoid people while still laboring under the delusion that I’m reaching out. Why are kids so into texting? MySpace? iPods? Those tools allow them to avoid each other, to stay somewhat removed from messy, risky personal involvement with anyone. We grownups are no different.

Back in frontier days, toys were simpler and life was simpler. Most time was spent surviving, so free time for adults was minimal, and toys for adults were likely unheard of, at least until the past century. Very few people made it on their own—teamwork was a must. Life spans were shorter; kids became adults much sooner. No one had time to try to create “time-saving” technology. Families waited for the children to become old enough to help, and then put them to work; no one was agonizing about whether or not they’d find an Elmo like Junior wanted, or whether the DVD they’d picked up for Little Miss had the extra features on it.

Is this progress, really? Yeah, people live longer. Yeah, I saw on PBS where they’re using stem cells to regenerate a dead rat’s heart in some lab in Missouri. Yeah, that’s amazing. But is it progress? Should we be proud of a civilization that has advanced itself enough to support people in need, but chooses instead to upgrade versions once again? Or even worse, agonizes over which scripted reality star is targeted this week? I have a hard time imagining life in Laura Ingalls Wilder’s time; I have an even harder time trying to imagine how disappointed she’d be if she saw what we’ve become in such a short time.

No, you are not alone, I feel queasy too. But I am guilty also and yes I want an 120 inch tv. I dont watch that many tv shows, but I do watch a lot of movies, and a big screen would be great.

I am reading "Mama's Bank Account", the book that the movie "I Remember Mama" is based on. I love it. Its a lot like the Little House books but set in turn of the century San Francisco with Norwegian immigrants the main characters. I love it. Why cant things be that simple? :( The time saving devices only add more chores to our lives (answering emails etc). :(

I blame the baby boomers for putting kids at the center of the world.

don't do it! 120 inches is tooooooooo big! you can resist! remember in that F. 451 book WHY they had the giant TV screens? so they would consider those people on the screen their "family" (this was the same book where the firemen would show up at your house to burn books!) I know you guys read a lot too so that is good. but I hope you will draw the line at giant TVs.

the book you are reading sounds very good. I know that "simple" also means hard, tons more work, hours spent on chores, etc. but then I also think that if things took longer, some would fall by the wayside and that's not so bad. we Americans are obsessed by cleanliness and owning everything and if we couldn't anymore, maybe it would be good for us. I know other countries aren't as freaky about showering and bathrooms and such as we are...

I don't know. it's hard to live in a culture and not buy into it. I believe it can be done--I think that our current involvement in our church, and literally grace and confidence that can't come from me personally, is the only way I'll succeed.

Like probably every other little girl, I desperately wanted to BE Laura Ingalls and thought I actually was in some past life. Yes, times were simpler, but way, way harder. My dad has a book called "The Good Old Days: They Were Terrible" that went into detail about how hard and dirty life was in the "olden days." I'd like to be able to pick and choose -- give me my microwave and washer & dryer, but leave the silly gadgets and toys. (I would have a hard time buying any child a Web-dependent "pet.")

yes, if I could keep the washer, dryer, and basic kitchen equipment, that would be good... but it seems you can't have one convenience without the 5 silly accoutrements that come about because of that convenience. and I do think that our society is a little too hung up on cleanliness. if everyone keeps consuming water the way we do now, pretty soon much of the world will be experiencing shortages... then we'll have to cut back. same with gasoline--if I didn't have it, I'd have to find ways to make do without driving. would that be bad? I'm not sure.

I don't consider myself materialistic, but society sometimes makes it hard not to be. Over the years friends have asked why I have worn the same winter coat for X number of years. Who cares; it keeps me warm. I find clothes that I like, and I wear them until they wear out (or I lose or gain weight); I don't care if some of my skirts have been around since the 90s.

As for toys, my kid has too much, but that is very little my doing. Bri's mother cannot seem to stop herself, trying to make up for Bri's childhood. For J's birthday, I asked her to limit it to one present. So she brought one large box, filled with about 30 items! It made me mad, and it made my family feel bad that they bought J so much less in comparison. That is crazy.

I have always admired the way you are in regards to things. I will never be as "simple" as you in that regard, but at least reading your posts reminds me of what is really important and helps to reinforce when I do shun stuff.

facie--if my posts can do that one thing (reinforce you in choosing to scale back and make your life simpler), then the whole blog thing will be a worthwhile pursuit. writing it down reinforces and condones it in my own mind, too--and that's good because after a day in the world, I need to step back and think clearly. you're right, though--you can only control to some degree what your child has around him/her b/c other folks may be more insanely generous than you'd like them to be...