The truth, so help me God 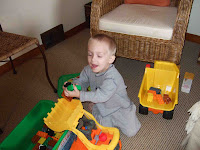 First, he would tell a story only after he’d been told one. The story he told would sound a lot like the one he’d just heard, although it might have the elements of several different stories all jumbled into one. For example, if Todd told him a fishing story about his brother, and then a couple of made-up stories about talking animals, then by the time it came from Marcus it was an odd mix of all the different tales, and his uncle would be conversing with Ellie the elephant on a train, or something like that.

Then he began retelling things from TV; I first noticed it when we watched his very first feature film, the remake of Charlotte’s Web. He loved it, and sat transfixed for the entire duration. The next day, he wanted to build “Wilbert” out of Duplos, and that led to the building of a Duplo barnyard, some Duplo cows, and the characters re-enacting snippets of the movie. He's retold other shows and movies we’ve since viewed, some of them several times, often with very different details… but hey, there’s a reason we call it storytelling instead of reporting.

It’s begun happening more often with stories we read. No sooner have we finished the book than Marcus looks very intently at me and tells me just what occurred in the story: “Tigger looked and looked and he couldn’t find him! They all looked and looked! He was in a stump!” The cutest thing about all this is the way he gets ultra-serious while relaying the events to you, as if they are of utmost importance. If you don’t understand him, or ask him to repeat a part, he’ll sometimes lean in very close to you, as if he’s speaking a foreign language. There’s his small, pointed face, his gray-blue eyes open wide, and his tiny lips are pronouncing each word for you with absolute care and intention. It’s a crack-up.

And occasionally, just occasionally, he’ll make something up completely, and I won’t recognize a single aspect of the story. Which means, sadly, that we’re likely approaching the fibbing tendency. I’ve only caught him in one actual lie, a rather harmless lie about brushing his teeth with Daddy when, in fact, checking with Daddy revealed that no such hygienic act occurred. It’s a blessing that he usually still reveals his untruths by fidgeting, or wearing an uncomfortable expression, or confirming the lie by simply his being unable to look at me at all. I know that it will not always be that way, but I can pray that he’s never very good at lying, or better yet, that he never comes to see that as an option.

Then again—do I really want him to tell me the whole truth all the time? Do I want that from anyone? Hmmmm. That’s something for each of us to consider in depth; I’ll comment no further here.
Posted by Mel at 4:10 PM

We have a real problem with lying here. Carrick is the main offender (although the twins have been known to dabble in it too). He's pretty good...looks you right in the eye. I can usually tell.

It's cute that he tells stories. None of mine do, with the exception of Cole telling me about books they read in school or about a TV show.

well, the stories can be entertaining, but sometimes they are just endless and nothing happens. like this: "there was this deer, and he was in the woods, and he saw a bunny, and the bunny was in the woods, and he lived in a tree. and then the deer was eating grass in the woods. and the bunny was eating grass in the woods. and..." you get the idea. it just goes nowhere. even with some prompting, all you can do it confirm that they were in the same woods. but I try to cherish it just the same. ; ) sorry to hear about the lying. little imps, all of 'em.

Oh, they all learn to lie sooner or later, it comes naturally! And NO, you don't want them to ever tell you the truth. Just as you never told your parents. (trust me on this - with two teens - one of whom soon to be a twenty - you DO NOT KNOW all that is going on with them!!!)

Love the idea of him telling you very slowly and carefully - like you have some problem because you can't understand him!