The passing of old red 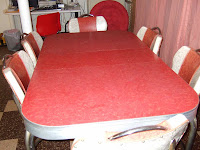 We parted with a table today. A funny old red table, straight out of the 50s or thereabouts, and some chairs as well. We inherited the set indirectly with the purchase of our current home, and a home can only hold so many tables… After some discussion, we decided to sell old red.

I tried to find it a good home; I looked around online for any furniture resale possibilities, and after much fruitless searching, I was hopeful we could unload it with a hip retro-only furniture shop in nearby Homestead. Although the owners found our table quite charming, they had a surplus of such stock and had to say No, thank you. They assured me that we’d find a home for it. I doubted them.

Well, those retro-store gals knew of what they spoke. I finally gave in and listed the set on craigslist. (Why do I bother with any other resale forum? Honestly?) I called it a retro 50s dinette, attached a few photos, wrote a quirky description detailing its good looks, its sturdy and dependable nature, its everlasting style and steadfast appeal…and waited without much expectation.

Lo and behold, within 12 hours I had four intensely interested potential buyers. All female, all willing to buy it on the spot. Only one asked if I’d come down in price; all the rest offered what we’d listed. One wanted to pick it up immediately, still another later in the day, and one poor, doomed latecomer couldn’t take a look until tomorrow…

Needless to say, the table is gone from our lives, less than 24 hours after posting the sale. I am really, really sorry I didn’t charge more money. Mostly, I am amazed at the power of nostalgia. What made all those ladies so desperate for such an item? The woman who successfully bagged the table told me she’d been searching for one and had missed out on a few because they sell so quickly. It reminded her, she said, “of her grandmother’s.” We’d heard that before, from just about anyone who’d ever glimpsed the table in our basement. But what makes that memory so precious? It’s a table, an old, somewhat scarred piece of furniture. It’s not hand-carved of rare wood by Grandpa, it’s not one of a kind, it was probably never an expensive item even when brand new. Yet now, it’s a coveted piece of memorabilia, a sought-after treasure. Why?

I wondered, as the woman and her son-in-law carted the table out of our home and into his truck, just what delighted her so—and she was visibly delighted, smiling and with a spring in her step as she talked aloud about where she’d put it. I wondered if, sitting at that table in her grandmother’s kitchen, this woman had first learned to make cookies. Perhaps they’d shared secrets, told family stories. Perhaps this table was like the one where her family had gathered for holiday meals.

Or maybe it wasn’t the memories of what happened at the table that make her happy; perhaps instead it’s the memories of her own self at such a table that are sweet. Perhaps at a table like old red, this woman had dreamed of all she would be, had wondered about her future husband, had planned her life’s successes and milestones. At such a table, she might have flipped her hair and displayed such cocky self-assurance that she almost convinced herself it was real.

It could be that all those women miss the world that surrounded that table when it was new—a world full of promise, a world where the facts of life were still fuzzy and able to be rewritten. Perhaps that softer, gentler world hadn’t yet established that life isn’t fair, that sometimes the bad guy wins, that even your own heart can be broken. Perhaps at that table when it was new, it was impossible to believe that there are people who are mean, people who hurt children and animals and old folks. There might have been an innocence that was nurtured at a table like this—an innocence that has since been dashed, many times.

For whatever reason, old red spoke to some fellow ‘burghers. Nostalgia in the form of a dining set swept through a few homes; a mere photo was all it took to bring memories sweeping back. Those memories must have been good, or at least bittersweet—an aroma from the past, appealing and heady and almost without equal in the world of marketing.

These tables are memory candy for sure if you're "of a certain age." My grandma had a red one similar to yours (only 4 chairs in her tiny kitchen, or maybe 3, as I remember the table pushed up under the window on one side). And we had a yellow one (with white accents and gray speckles). They sure are special pieces of Americana. (Plus they wore like iron -- perfect for card playing, game playing, and of course, meal after meal.) Thanks for the trip down memory lane -- wish I had room for one at my house.

they are nice tables/chairs. and we had one in the kitchen, I think, when I was a kid. definitely lots of memories made on those surfaces. I hope old red is appreciated in his new dwelling; I suspect he will be.