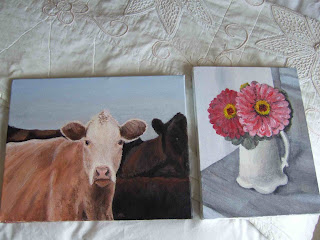 Hey all, here are some of the fruits of my painting labors for the past few months. I wish I could say I whipped these out in a couple of weeks (and in reality, the hours invested would amount to far less than that span of time)…but the blocks of time that I can carve out and justify for painting are just not as frequent as I’d like them to be.

I also did a commissioned piece in the fall, which I didn't show here because I didn't like it as well as these two; they were simply for sheer enjoyment. I'm partial to the cow. I love cows. Aren’t they beautiful? And so expressive? Whoever coined the many unkind phrases about cows, especially those sayings that connote cows with unattractiveness, must have never had the opportunity to gaze into a bovine face and study its depth and loveliness.

However, I digress. The real point was supposed to be that I will work for commissions. And very, very reasonably, I might add—I’ll paint just about anything for less than ONE MILLION DOLLARS. (This stated with my pinky in the corner of my mouth…) (Ha ha ha ha.) Okay, in truth, I work for a fraction of that—truly, a fraction. As in, about 1/20,000 of that amount. Seriously. I’m going to tool around and paint stuff anyway, so I might as well be painting something for you. Right?

Food for thought—or some “cud” for you to chew on. Happy weekend.
Posted by Mel at 9:20 PM