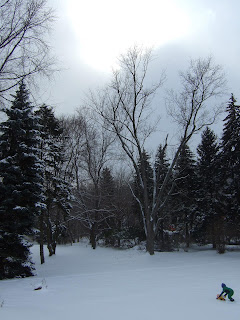 Every now and then, you come upon a moment in time that merits preservation, just as it is, so that it can be revisited time and again for years and years. I had a couple of those recently.

The first? It came earlier on the day that I snapped this photo. It was mid-morning on a recent weekday, and all potential errands had been shelved after the kid and I gazed out the window and then studied the forecast on television. Big, fat flakes were flying, the heavy kind of flakes that accumulate in a matter of minutes. I had decided to dedicate the day to home chores and possibly baking, since a cold, home-bound day is good for little else.

I was folding some laundry in my bedroom; the boy was playing in the living room, just around the corner (our home is a ranch-style house on one floor), and the heater had just kicked on again. We’d forgone the radio to take a noise hiatus, and were simply enjoying a quiet morning in our cozy sanctuary. As I folded, I heard the air rushing from the vent, listened to the soft rustling of the bedclothes I was folding, and breathed in the scent of clean sheets as it wafted over me. And then, in the next room, I heard my little son singing softly to himself; I’m a little teapot, short and stout. But he didn’t sing the words aloud, he simply hummed the tune over and over, in the quiet high voice he uses when he’s unaware that anyone is listening. I could hear the sound of his Duplo blocks too, the small rattle of plastic pieces jumbling together as he searched through a pile for just the right one. He hummed, the blocks clicked, the sheets emitted that gentle scent, and outside the window the picturesque snow descended gracefully, blanketing the world.

The other moment? I met a friend for breakfast last Saturday morning in the Strip District. I stood outside our designated meeting spot, in frigid temperatures, and watched hordes of people stream past the restaurant, nearly all of them clad in black and gold. A large, incredibly dirty delivery truck lumbered by—and written in the dust on the back doors of the vehicle were the words “Here We Go, Steelers.” I stood in line at a different store a bit later, and the middle-aged fellow in front of me sported both expensive loafers and a most ridiculous gold beret with a mishmash of Steeler paraphernalia clipped to its outer edges. My friend and I walked Penn Avenue, the well-known phrases of “Here We Go” ringing in our ears, making our way among throngs of people who sported black and gold fashions and were purchasing even more. Every kiosk featured some of the desired colors, and the Strip’s favorite paper and party goods store boasted a line out the door, perhaps 20 people deep, all waiting to spend hard-earned bucks on Steeler-themed gear for the big game. At one point, as we threaded our way along the cold, crowded sidewalk, gold confetti filled the air for no apparent reason other than the confetti operator simply couldn’t wait another minute to celebrate our glorious team.

I know it’s just a sport. I know the fellows who play the sport are mere humans, with faults and foibles like the rest of us. But oh, what a wonderful feeling, the electricity in the air, the smiles on every face. We’ve lost our collective mind over a team, and it’s such a delightful experience.

After all, God created football, too.

P.S. The best part? Kurt Warner seems to be a great guy who appreciates his many blessings. See this site if you’d like to know more.

And rest assured that whatever the outcome of the game, a deserving team will accept that Lombardi trophy tonight.