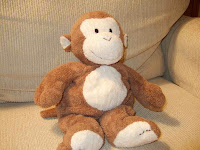 One of Marcus’ favorite stuffed toys is a monkey whom he’s named—appropriately enough—Monkey. (So logical, my boy is. I love it.) Monkey doesn’t possess quite the same long-standing favor as, say, the twin teddies, but he’s pretty close. Monkey is a frequent player in Rescue Bunny, Doctor Bunny, and any other pretend game that goes on here. He is also known to ride in, and even drive!, various trucks around the house. He’s been seen bull-riding on Eddy Bunny’s dad at least once. He sometimes sits with us at meals, and he is always present when Marcus goes to sleep at night.

The funny thing is that Monkey has taken on a strong personality of his own, and apparently it’s such a sparkling personality that it’s given birth to a whole alternate world. Monkey’s world is not a Bizarro World, where things are opposite what they are in real life; Monkey’s world is more of a companion world, where situations and events are similar to what goes on here at our house, on our street, with our friends, etc.

For example, a song will come on the radio, and Marcus will proclaim, “I love this song. Monkey plays this song at his house all the time.” Or, Marcus will be enjoying a particular food, and he’ll tell me, “We eat this at Monkey’s every day.”
Many days include informal play dates at Monkey’s: “I’m going to Monkey’s this afternoon to play. Hedgehog can’t come because he is sick.”

Sometimes, the exact same thing happens in Monkey’s World as is happening in ours; Marcus and Daddy saw an accident scene on the road as they drove home the other night, and sure enough, Marcus and Monkey had seen flashing lights along the road earlier that day. A water main broke on our street late one night, and wouldn’t you know it, a main broke on Monkey’s street the very next day. Monkey has friends at preschool just as Marcus does; Monkey also tends to suffer the same injuries as Marcus does… You get the idea.

I'm amused that this is the first obvious imaginary friend—a soft, bean-bag primate, a faithful friend, a fuzzy pal with whom Marcus can share everything that he can’t or won’t share with his live counterparts. Sometimes, in rare quiet moments when Marcus plays in his room, I can just barely hear him in there conversing with Monkey (whose voice is very high, I’ve discerned). I wonder what they’re talking about. I wonder what Monkey has to say about it all. I imagine him listening carefully to my boy, then lifting an eyebrow and commenting in sage fashion. I picture him hanging by his long tail, swinging idly from a bedpost while the two of them plan their next Duplo engineering feat. I picture him smirking in a silly fashion as they hide successfully from Eddy Bunny in a good-natured game of hide-and-seek.

The whole exercise takes me back to my youth, when I honestly suspected that stuffed animals came to life when I wasn’t looking. I suppose I knew the truth even then, and yet—can’t you picture Monkey going about his business in that alternate world? His existence isn’t really any more absurd than our own, when you think about it.
Posted by Mel at 6:32 PM

I'm reminded of Calvin and Hobbes. :)

Aw, that is cute.

I still sleep with Mr. Bear, a pink bear I got as a gift in high school. Fortunately, he does not talk.

It sounds as if Monkey is pretty well-behaved. Jordan's animals and babies seem to always be on timeout!