It's been a good summer so far, yet I've been feeling a tad deflated of late.

I couldn't quite pin down the reason why. Maybe it was the incredible heat. Maybe it was the fact that the rat is still living in our garden, and in our attempts to kill the thing we mistakenly murdered a chipmunk instead. Maybe it's because I'm the only person I know who gains weight instead of losing it during the hottest months of the year. Maybe it's because we were thinking about trying to move to the country, but then, with Todd starting a new job and then being out of town for a week, we've missed the search-and-sell window of time that we'd need to change schools before the new year. Maybe it's because I'm yet again disappointed in the way my church handled a sticky personnel change. It could be any of those reasons...

But then I figured it out. The real reason for my slump is that late July is the mid-life crisis of summer. It's the point when you look back at what has transpired thus far, and ahead to what remains. Late July is when you begin to realize you may have squandered much of June, what with alternately thinking "we have all summer" and running around too much instead of truly appreciating the fresh green world around you. Late July is the reality check, when you start to actually number the remaining weekends in the season. It's the time of summer when you begin to understand that you won't fit in all the fun experiences and events you'd hoped to, simply because there's not enough time, or money, or both. It's when you glimpse the first back-to-school sales ads, and remember all the educational activities you planned to tackle each week with your kid... and didn't. 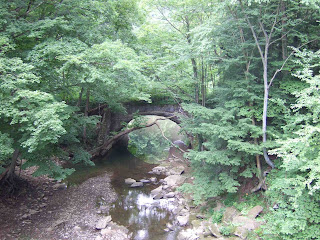 But it's okay. For all those things I'm reluctantly crossing off the list, the things I'm planning to put on next year's summer list, I'm also examining the list of fun things we have managed to fit in: picking berries, visiting museums and downtown, running through fountains, swimming, taking hikes, playing with friends, visiting with family, cooking out, sitting on the porch, reading and telling great stories, eating ice cream—lots of ice cream (hence the weight gain)... We haven't squandered too much, now that I think about it. We've had a pretty good balance. I even got the kid to paint with me this morning, "plein air." I lasted much longer than he did, but he made sand souffle in his sandbox until I was ready to break for lunch, and a light breeze was blowing, and the sun shone beautifully but not directly on us, and all was unbelievably well.

Coming to the 40-something point of summer is a lot like living to that point of your life: there are regrets, and there is also rejoicing. There is ever-increasing thankfulness, and an effort to strive for joy, with the growing understanding that it is a choice.

I suppose I was just feeling the mortality of summer pressing down on me a bit. Happily, we still have a few weeks left. And if I'm looking through the long lens, we hopefully have next summer, and maybe even the next after that. Life is like that; you can't dwell on the haven'ts. You have to acknowledge them, but only so you can work them into the next list. I'll try to spend much more time reveling in the Have Done category than grumbling through the Haven't Yet list. I strongly encourage you to do the same.

That said, however, don't sleep too late, or get stuck in front of the stupid TV. Those guys are summer thieves for sure.
Posted by Mel at 10:30 PM

I know what you mean. Have the same thing here. But my summer is mostly over -- at least it seems like it. We started football already on Monday, so that means that most of my free time is gone. I have to start supper at 3:45 or wait until 8:30 to eat, not to mention that practice goes from 5:40 (when we get there) until at least 8:15 5 or 6 days a week.
We have had a wonderful summer so far, though. The kids, me and my mom went to Williamsburg for 5 days in June and now we just came back from Florida a few days ago. So now I am ready to "relax" and enjoy the rest of summer with a new schedule. Mark is going to be doing a lot of traveling to China and CA. And we have a birthday party for all the boys! I just don't know when I can fit it in...
And CONGRATS on Todd's new job!!!!

wow, Cari, lots happening! sounds like fun trips, although I'm surprised you didn't melt in FL... football is all-consuming. I wish you patience. the birthdays will be fun--and what the heck with Mark in China?!? thanks for congrats. it's nice for him to have his Saturdays back. : )

Mel: I thought I left you a comment on this post, although I cannot remember what it is I said. However, I wanted to tell you not to let the time of year to sell/buy deter you. If you found a place you liked, you and Marcus should visit the school and then Marcus should spend a half day there. (Maybe you can't do that in public schools, though?)

Jordan did that before she started her current school, and it made the transition so much easier, although she did start at the beginning of a year. Two girls also did that at Jordan's school last year. The new kids were made to feel welcome, and the current kids were excited to see new faces. Some teachers will have a welcome sign waiting for the new kids, which helps them feel special.

Just something to consider.

thanks, Facie--good thoughts. if the perfect place comes along in a less-than-ideal time of year, maybe we'll go for it anyway. I can talk to the new school if that all goes down by some miracle. ; )