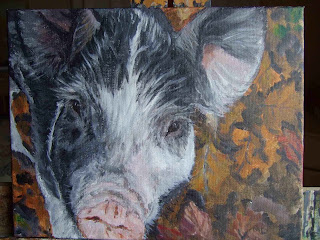 Here's my latest painting, created from a photograph taken on a most awesome farm north of Pittsburgh.

The farm was still making final decisions about its name, last I heard, but I've already named this cutie: Berkshire Beauty. You can read more about the pigs, piglets, and other animals on the farm if you click on the Paleo Habitat link over there on the left. (I'll put Berkshire in my Etsy shop tomorrow, if not sooner.)

The people who run the farm are awesome; it's so neat, and inspiring, when you hear stories of and from people who are taking big steps, and some risks, just because they believe in a cause. That's what these folks are doing. In addition to running a household, taking kids to activities, working, juggling all the same things that most of us try to manage daily...they're also taking care of a couple of small herds of livestock. If I understood them well, then the biggest reward is just seeing these lovely creatures doing exactly what they're supposed to do. The family behind Paleo Habitat takes pleasure in the farm experience itself, the contented animals in their natural settings, even the struggles and hard work that must be endured to care for their charges and keep them well.

The result of all the effort is happy creatures being themselves. Will the animals still come to the end of their lives on a dinner table? Yes, some of them will. This farm isn't a retirement home for the animals. But until that day comes, these beasts will relish carefree days in relative comfort, some of them mowing the grass, others rooting for nuts and pieces of apple with their grain. At least, I think it was grain... And when one of these animals arrives at that final day, I'm convinced from the dedication and commitment I've seen that these animal owners will ensure a quick and humane end.

My point is this: These pigs and cows (and whatever else comes to that farm) will live in fields of grass, not small squares of mud and filth and fecal matter. These creatures will not be forced to subsist on a diet of corn and corn derivatives until their stomachs ulcerate simply because corn is cheap and plentiful. These folks have read the same books I have and more, they've studied the big, awful meat producing operations in this country, and they've decided they're not having any part of it anymore. They believe in what they're doing and they want to do it well, for themselves and for the animals in their care.

And I respect that. Very much.

Inform yourself. Farmer's markets and small farms are growing quickly in this country because people are finally getting a whiff of the crap that our meat supply has eaten, stood in, and been forced to survive until it's killed in an often horrible, painful fashion. It doesn't have to be that way.

P.S. Stay tuned: more information about the meat supply here at our house to come in my next post!
Posted by Mel at 2:26 PM

You might want to mention that Food, Inc. is available on netflix, along with a lot of other good documentaries. Also Fast Food Nation is a good book.

the movie King Corn is also good (and alarming). more to think about, with a stress on LOCAL food, is Animal Vegetable Miracle by Barbara Kingsolver (suggested to me by none other than this very Anon. person!)

and the entire Slow Food movement which began in Europe (Italy, I think?) has very admirable roots.