Well, I told you last time around that I'd share some information regarding our household supply of meat. So, here goes.

My husband hunts. I have no moral dilemma about this, because I know he is a responsible adult who has been trained properly in this arena by other responsible adults. Plus, I know he respects life of all kinds, and the creator of life to boot. Additionally, he does his best to prepare himself and his weapon so that when a hunting opportunity arises, he is ready and can aim with practiced care and accuracy so as to make the animal's death quick and as free of suffering as possible.

(I also know that my little son is not with him while he engages in this pursuit, and I am more than a tad relieved that the kid has not yet shown serious interest.)

Anyway. We try to be honest with our child, and that involves talking openly about hunting, wild animals, death, humane treatment of life, and our food supply. (Most kids can handle the truth; it's the adults who turn away and get squeamish.)

So, my hunter was successful on one of his recent archery forays, and he made an excellent, quick-kill shot on a very large buck. For the past few years, thanks to some knowledgeable hunting friends from church, my husband has begun to process his own animals. I won't lie; this freaked me out at first, mostly because it happened in our garage. Yes, my father hunted also, as did many of the people (kids, too) in my hometown. I'm comfortable with that, as long as the people who hunt are cautious, mature, and respectful of life. I'm not so comfortable with animals being skinned where the station wagon should be... I'm also not so comfortable with large pans of flesh, or with an electric grinder making a horrific racket in my basement. But? I'm getting there.

The whole experience, now that we've been through it more than once or twice, is actually very informative. I've learned a lot about different cuts of meat on grazing animals—which ones are typically tender, which ones are tough, which ones require a full day of roasting in juices but deliver wonderfully when granted patient, proper cooking techniques. I've learned how deer carry their fat in a totally different way than beef (the fat is layered just under the skin, not marbled throughout muscle... although most of the heavily marbled purchased meats are coming from cows that were fed corn, a totally unnatural and harmful food product for them...) I've learned that honestly, doe meat tastes better than buck. I've learned that a whole lot of garbage can be hidden in any purchased sausage product. (Don't say you haven't been warned! Some of those sausages could make hot dogs or gelatin seem pretty harmless, folks...)

Anyway, mostly I've learned that butchering is bloody, messy work, and that for all my concerns about our garage and basement, they're likely just as (if not more) sanitary than a typical butcher shop.

It's hard to ignore the fact that you're eating animal flesh when you watch the stuff getting ground up and mixed with other stuff, emerging like little worms from a loud machine. There's pretty much no getting around that image. You're eating meat. But hear me on this: Any time you eat meat, even prettily packaged plastic-wrapped store-bought meat, you're participating in this procedure in some way. You're funding it. For anyone who's labeling my family and me as barbarians right now, I ask you only this: when did you last eat a burger? a pepperoni pizza? a good steak? The more marbled the steak, the more likely that the cow it came from was close to death from corn consumption even before it was slaughtered. Fish? Yes, it too had a face once. Not cute and fuzzy, not pretty and big-eyed, but a face nonetheless. For all the people who are shaking their heads at us right now, ready to dial CYS to save our child from this horror, I say to you that you are part of it, too, every time you go out to dinner and watch your children happily, mindlessly consume chicken nuggets.

If you eat meat, any meat, then some creature had to die, in some form or fashion. 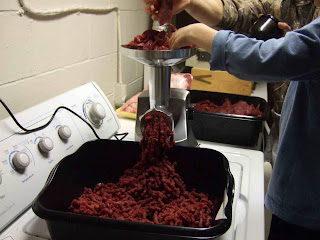 I'd rather know what I'm supporting than not know. I like helping to determine exactly what goes into our meat supply regarding flavors and source foods. This deer was fat, healthy, and happy; he had a good life. And frankly, I'd rather participate personally in his death this way than support some of the cruel, sick, and unusual practices that are rampant in modern feedlots. If I ever have the acreage, I like to think I'll try to raise my own chickens and turkeys.

That's how we spent a few hours during the past week or so. And I like to think that in the big picture, we're no worse than anyone else. At least we're informed. We know where the food came from. We know how it was prepared. Yes, we all washed our hands repeatedly, and sterilized the necessary surfaces with bleach. But I have peace of mind about it all.

P.S. I hope I didn't scare anyone away permanently. It's a topic worth pondering, I assure you.
Posted by Mel at 7:07 PM

Mel: I have never had a problem with people killing animals for food. Although I could never do the deed myself, I am not ashamed to say I enjoy meat. And Brian hunts, although he has not had much luck recently.

My aunt and uncle had two cows that they had their butcher eventually turn into Ralph and Armando burgers, steaks, etc. (probably not so good to name the creatures). They controlled what they fed those guys, and we eventually enjoyed them.

Every once in awhile I think about the meat I purchased and where it came from (faraway probably), how the animals were treated, and what kind of chemicals I am probably consuming (the worst part for me). But mostly, I keep my head in the sand and try not to think about it. I don't think you need to defend yourself. But shoot, I feel sort of bad now...

Well said. Of course, lots of the kids at my school hunt - some very young. Most are well supervised and understand what they're doing. And you're right - the meat at the store can be scary and I do worry about treatment. No apologies and be proud you and Todd are supporting your family wisely. And don't be surprised when the boy starts wanting to tag along!

My brothers also hunt and process their own deer meat. I've never participated, but I applaud their efforts and yours. Don't know if you know of the show The Fabulous Beekman Boys, but they, too, try to live closer to their food. I just read that they produce 80 percent of what they eat on their own. That includes raising their own pigs and having a local butcher process them. They had a moving episode on that -- hard for them to sacrifice their "pet pigs" but they did it with respect and thanks for what the animals provided them.

Just finished a good book - Little Britches - kind of like Old Yeller and Little House together. True story of a boy whose family homesteaded in Colorado in 1906. ANYWAY, while butchering, his father explained it like this - every thing has something expected of them in life. When you have fulfilled it, you can move on. The pigs (in their case) had a duty to grow, and feed the family. Which they did. He put it better than I am, but it was quite well put. Suggest the book - Little Britches by Ralph Moody.