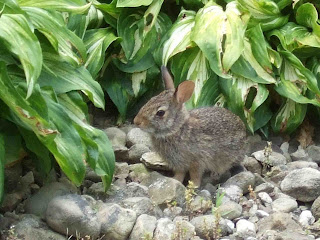 We live only 10 minutes from downtown Pittsburgh. But you’d never know it from the varieties and numbers of fauna that co-exist with us.

It’s increasingly obvious this year—perhaps I’ve been outside more than last?—but I noticed a few weeks ago that in addition to the adorable chipmunks and pesky squirrels that frequent our yard, there was also an unbelievably cute young rabbit frolicking around the back and side yard. I lucked into the pic you see here, along with many others that were taken while the bunny decided in which moment to scamper away. We still see him almost daily, and it’s always a treat. Until he begins to eat the lettuces.

Now, soft bunnies are one thing. The deer are quite another; they stopped being sweet-faced and picturesque some time ago, when we began to refer to them as our pet deer. I opened the door after dark one recent evening, distinctly heard the sound of chewing, and turned on the light to catch one of the big does munching down every available leaf on our hosta plants, the poor marred things. All that grass, and what does she eat? Our plants. She stood her ground, too, staring dumbly at me in mid-chomp even when I challenged her, the incriminating evidence hanging from her half-closed jaw. I had to descend the steps before she scampered away, and even then she didn’t leave the area, just stayed out of the light’s reach and continued chewing boldly. The scamp.

Then we took it up a notch. The kid was helping me scout the bunny on our hill of river rock out back, and suddenly he was pointing and hollering, “Snake! Snake! Mama, snake there!” I doubted him, scoffed at his claim, and then—lo and behold—I saw the slinky creature. A smallish black snake, no more than a foot long, creeping across the rocks to hide in some undergrowth. We took a timid step closer, peering into the plant where he’d hidden, and the nervy little reptile stuck his head out to peer right back at us. He was completely unfazed, stared us down, and then sneaked back into the bush without another glance. I keep looking for him a bit nervously, but he has yet to reappear; he’s waiting for me to go traipsing down that hill shoeless, no doubt, so as to maneuver his way under my foot and frighten me into breaking bones on those rocks.

The crowning glory of my animal events came the other night, as I sat on the patio, talking to my father via telephone. We were chatting, and I had no lights on, just a candle lit, and I was telling him something that I can’t recall now when I heard a dog a few doors away barking madly. Not a big deal, that—I hear it often. But within just a few seconds, I heard another sound: the skittering of clawed feet on concrete. And then, a dark form scurried right in front of the glider on which I relaxed, vulnerable to attack. A dark form that hurried low to the ground, head bent, masked eyes darting ahead to quickly map the rest of his retreat. His ringed tail followed him, barely dragging the pavement. In a flash he was gone, the big thief, probably startled away from someone’s garbage where he’d been trying to filch a late-night snack.

That one threw me for a loop. I’ve never been so close to a raccoon before, and this one was a biggie. I don’t think he ever knew I was there.

They're encroaching, the critters. Better keep the screens in tiptop shape. Cute as they can be, I don’t think I want these wild beasts any closer than they already are.
Posted by Mel at 10:45 PM

Cutest bunny ever!!! I foresee a new painting in your future. If you dont, I will...
Ooo, at the raccoon. They literally reach through the crack in our rubbermaid garbage can and pull out the garbage with their little hands. creepy...
I thought you were going to say you saw a coyote...

haven't seen or heard a coyote yet, although they can't be far off, since they're no stranger to your grounds... yes, the little fingery raccoon hands are a tad creepy, in the same way that leathery monkey hands make me feel weird. and we should both do bunny paintings!